With the full out invasion of the Ukraine by Russian forces on February 24, 2022, the fourth stage of the Ukrainian crisis has tragically arrived. No longer hiding behind the pretense of veiled language like “peace keeping mission” for the newly “recognized” regions of Donetsk and Luhansk, Russian troops were ordered to mount an invasion against the Ukrainian government. Continuing the work I had been doing since 2014, I witnessed the escalation of events as Putin’s misconceived and failed attempts to quickly replace Ukraine’s democratically chosen government turned into a war against the civilian population. With all the right reasons to defend their homes and their freedom, Ukrainians are fighting against an army whose reasons to fight their neighbors are diminishing rapidly.
Having had to come to terms with this violently sudden shift in their perception of what their Russian neighbors are prepared to do, Ukrainians, no longer reeling from the shock, are mobilizing their fury as well as their fear to fight for their lives. 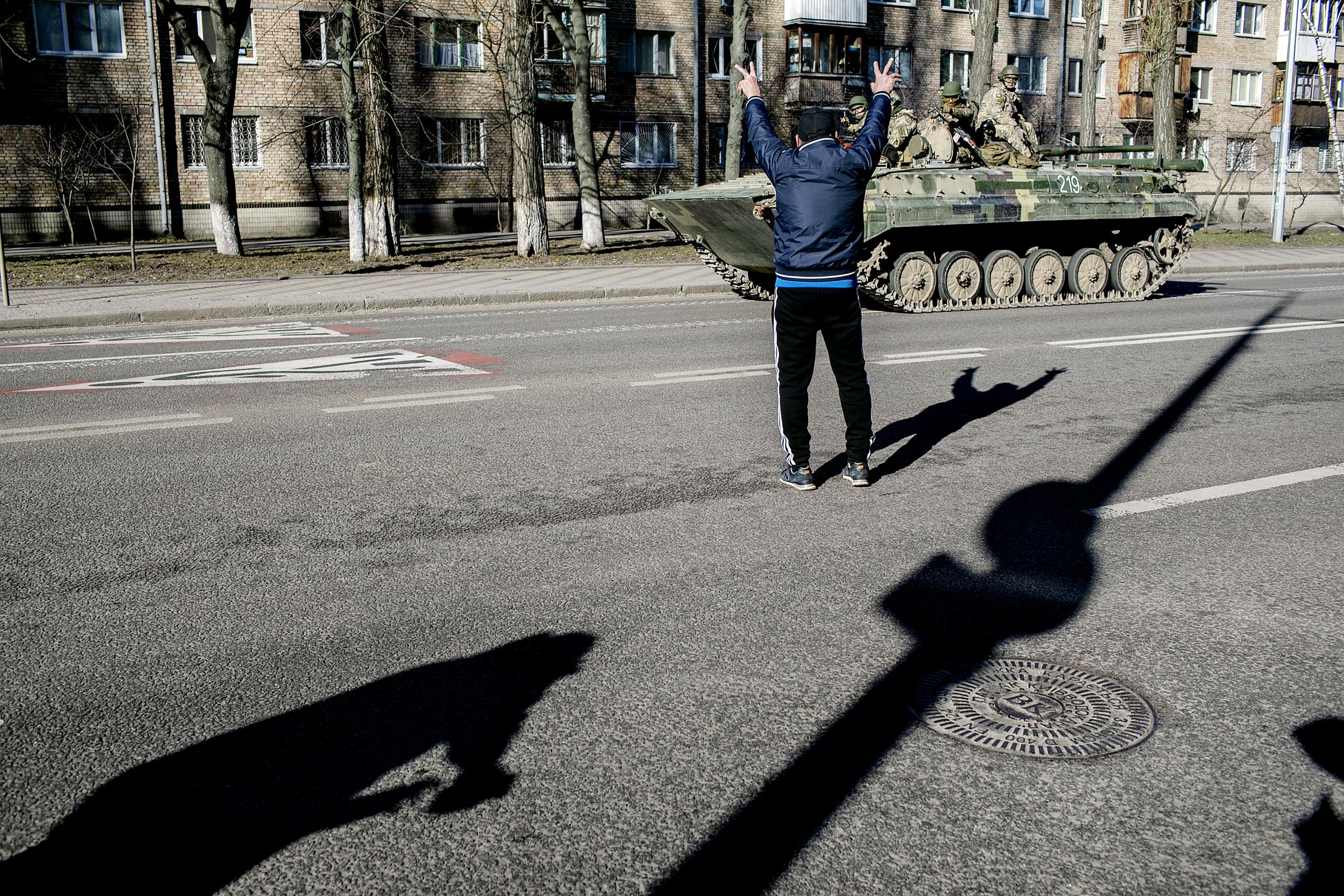 Residents wave as a Ukrainian army convoy crosses one of the main streets in the northern parts of Kyiv on the third day of the war. 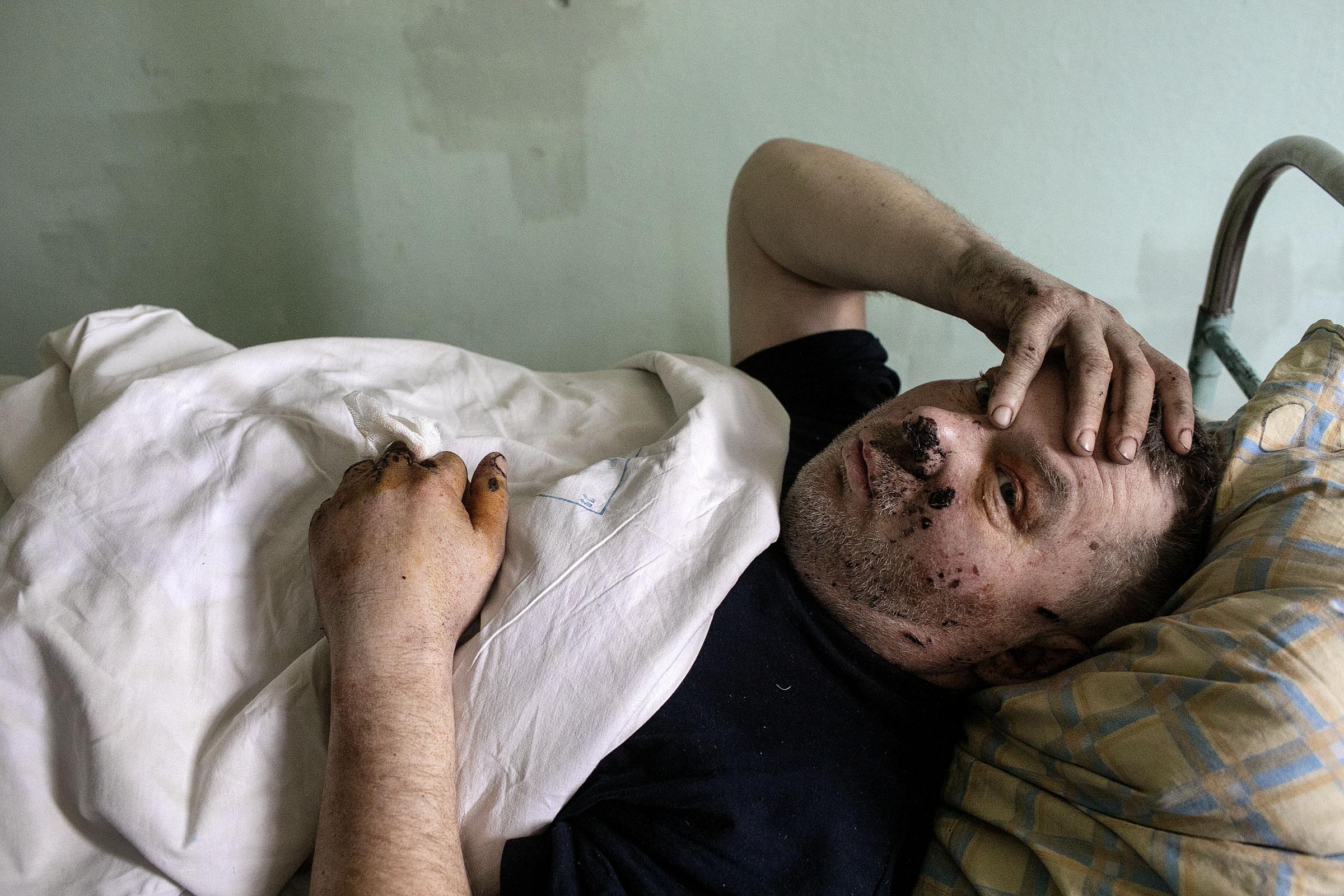 Yevgeni (50), was injured while driving his car away from his village, Pdilisia, towards Brovary city after Russian forces had opened fire inside the village. Fleeing the fighting with three other civilians including his wife, the car went over a mine. Three were eventually rescued by a Ukrainian army ambulance team, who took them to the hospital in Brovary. One passenger died in the explosion. 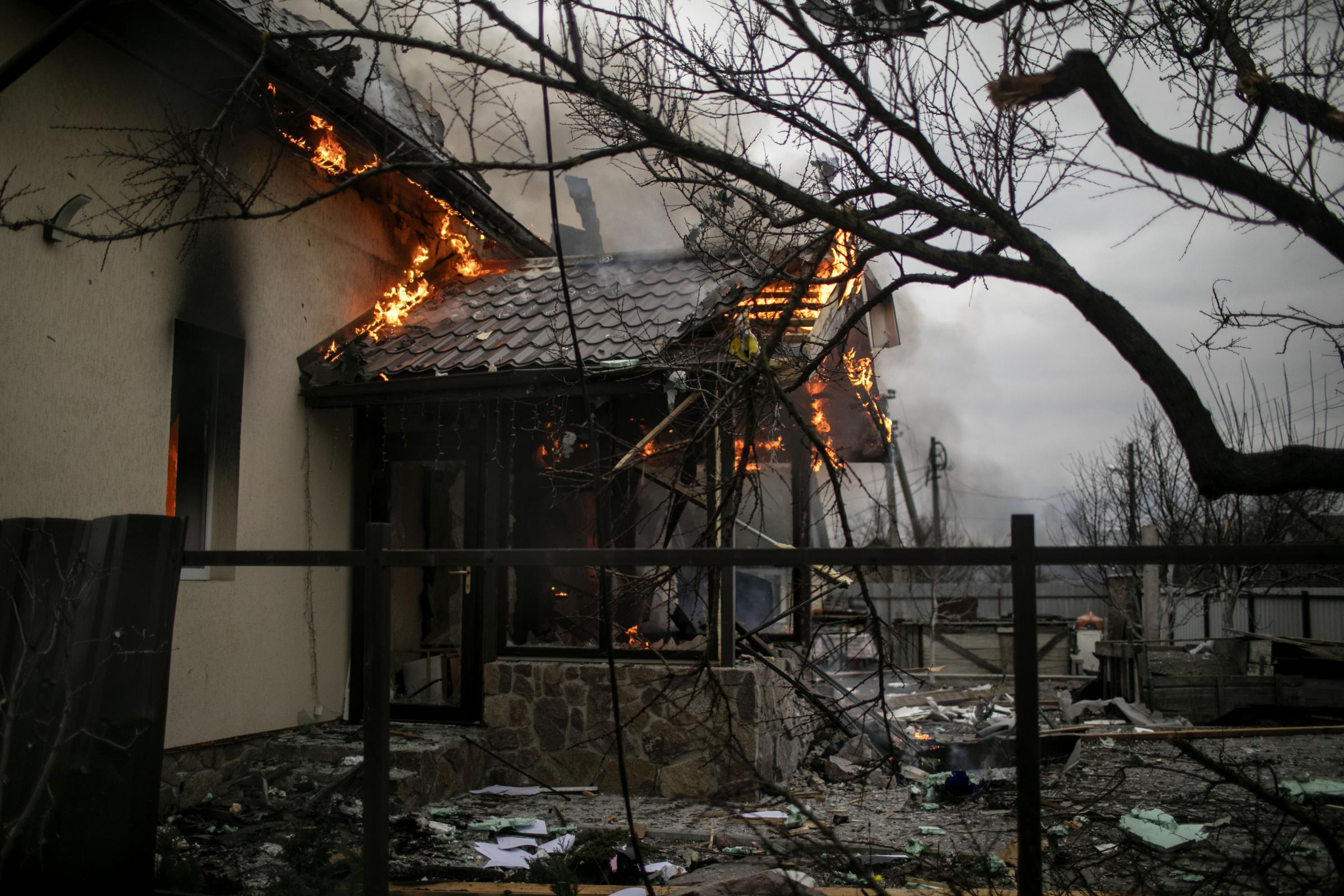 A house in the outskirts of Irpin city destroyed by Russian shelling. The city became the site of military engagement during the Kyiv offensive when Russian forces took the Hostomel airport in the north of the city to facilitate their advance southward towards Kyiv. Under Russian artillery fire, the Ukrainians were able to repel and destroy multiple forces in their attempt to move Into the city. 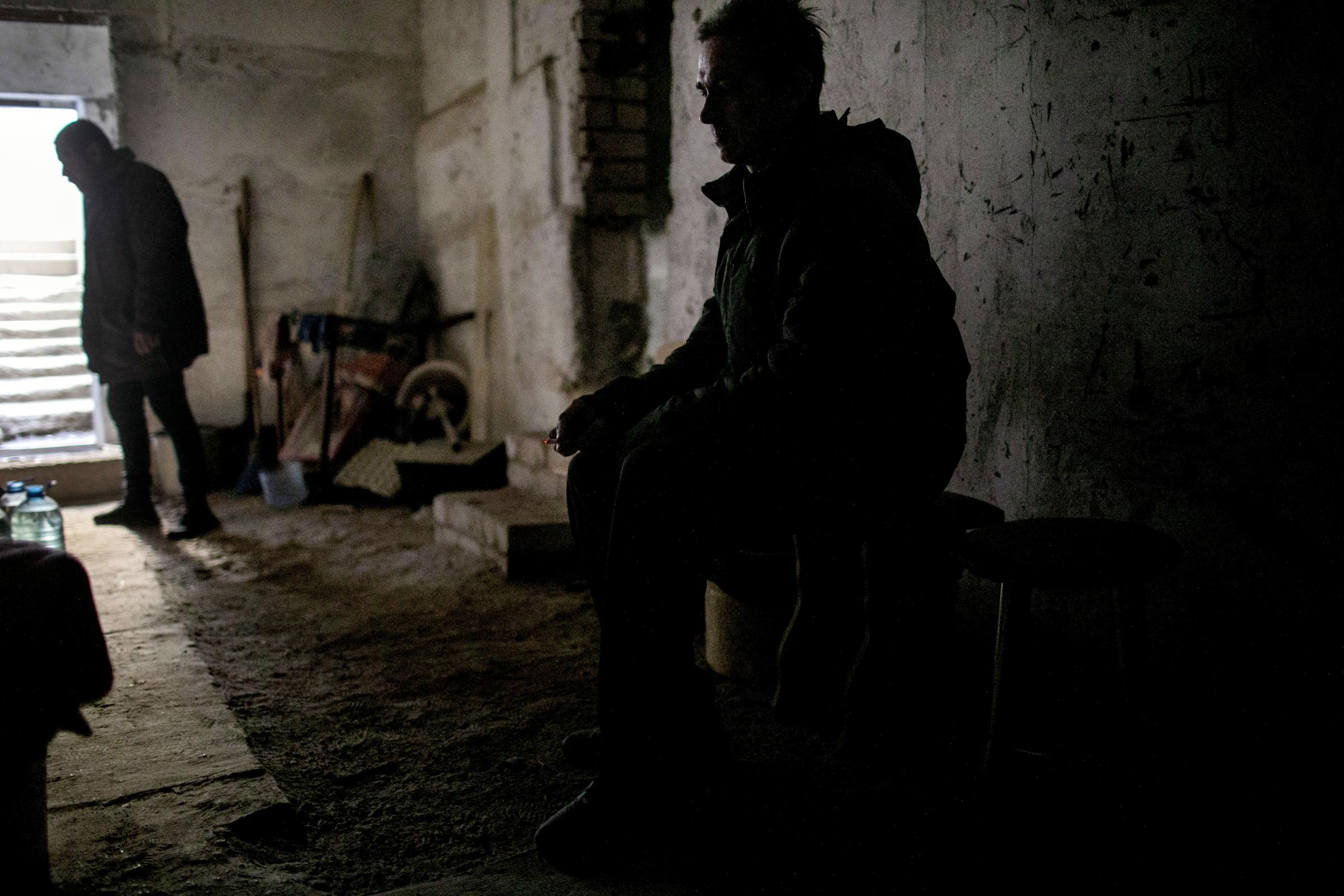 Residents of Saltovka, staying in an underground makeshift shelter, under school number 172. as this area of Kharkiv city, is under constant Russian army shelling. 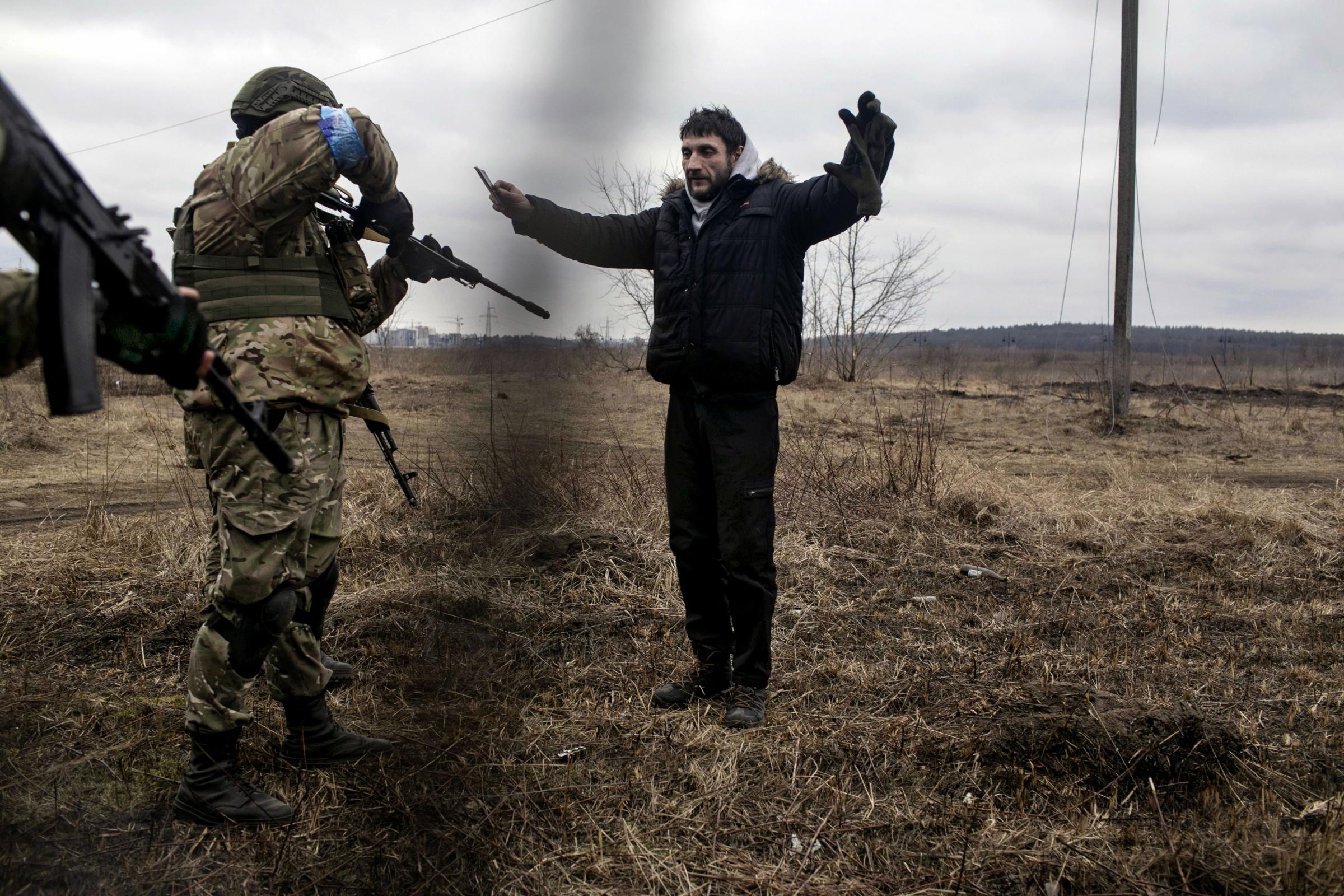 On the outskirts of Irpin city a civilian, suspected of being a Russian spy, is questioned by Ukrainian soldiers when he is found close to their position in his car. After some terrifying moments he is cleared and given free passage. 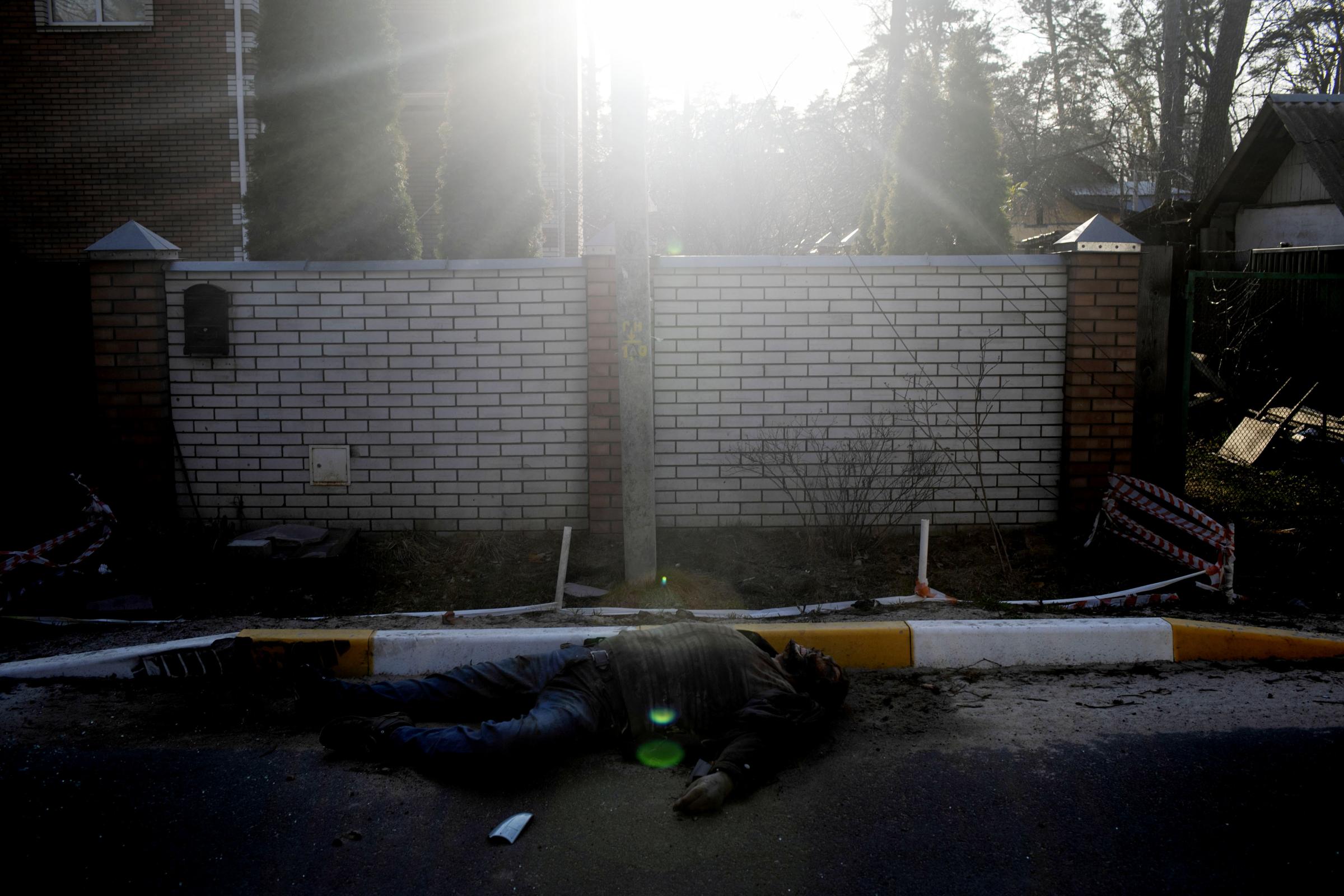 The body of a civilian who was shot by Russian soldiers on March 5, 2022, laying in the street close to the central park in West Irpin city. According to Human Rights Watch, on March 6, 2022 an intersection on a road used by residents of Irpin to escape the fighting was bombarded by Russian forces. As of 24 March 2022, eighty per cent of the city had been successfully recaptured by the Ukrainian Armed Forces from its Russian occupiers. On 28 March, Mayor Oleksandr Markushyn announced that all of Irpin was fully liberated by the Ukrainian army. 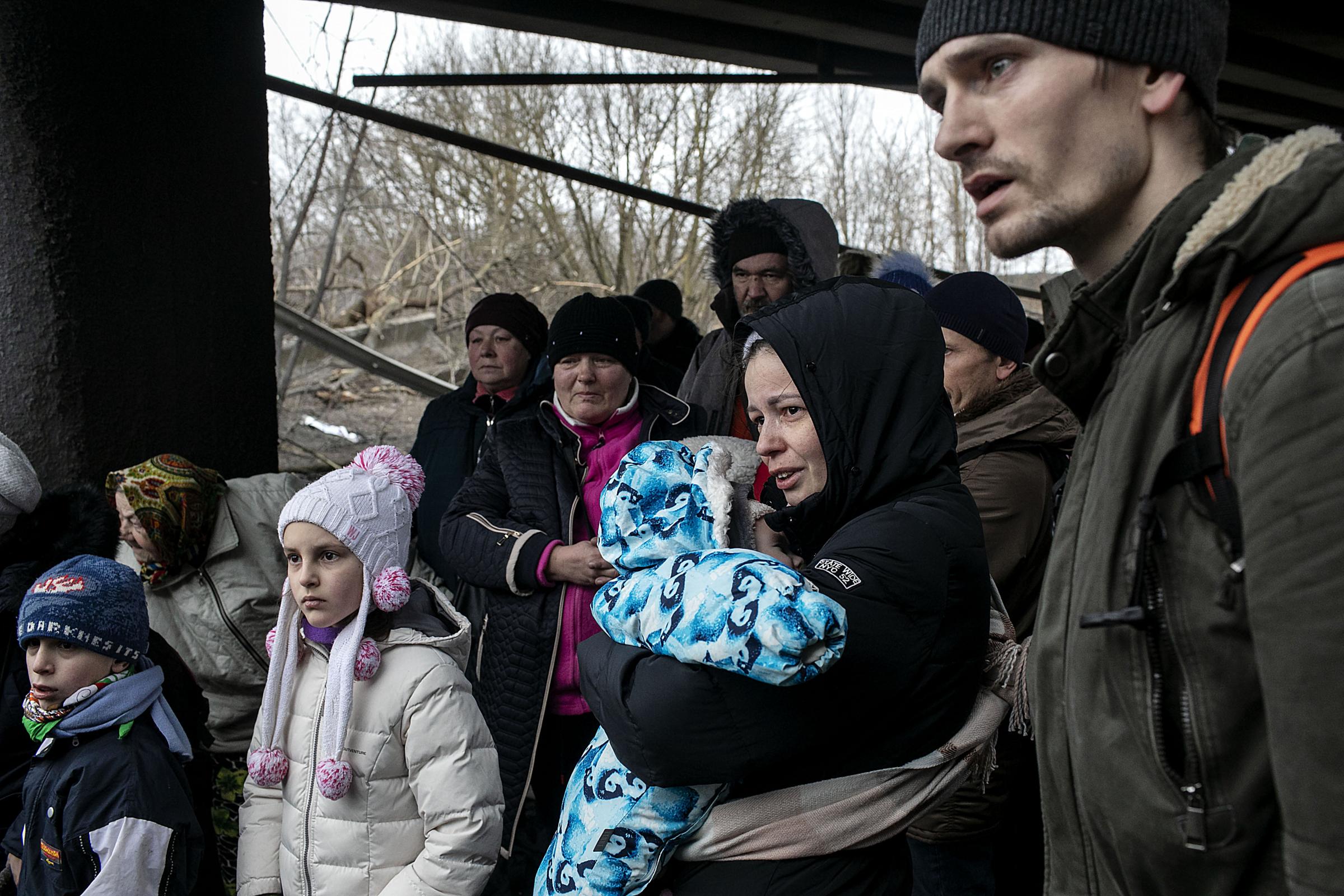 Residents of Irpin wait to be evacuated under a destroyed bridge that connects the city to Kyiv. Volunteers and Ukrainian army personnel help them cross the bridge and get to safety. Although Ukrainian forces were able to repel and destroy multiple forces invading Irpin it remained a dangerous battle zone for days. 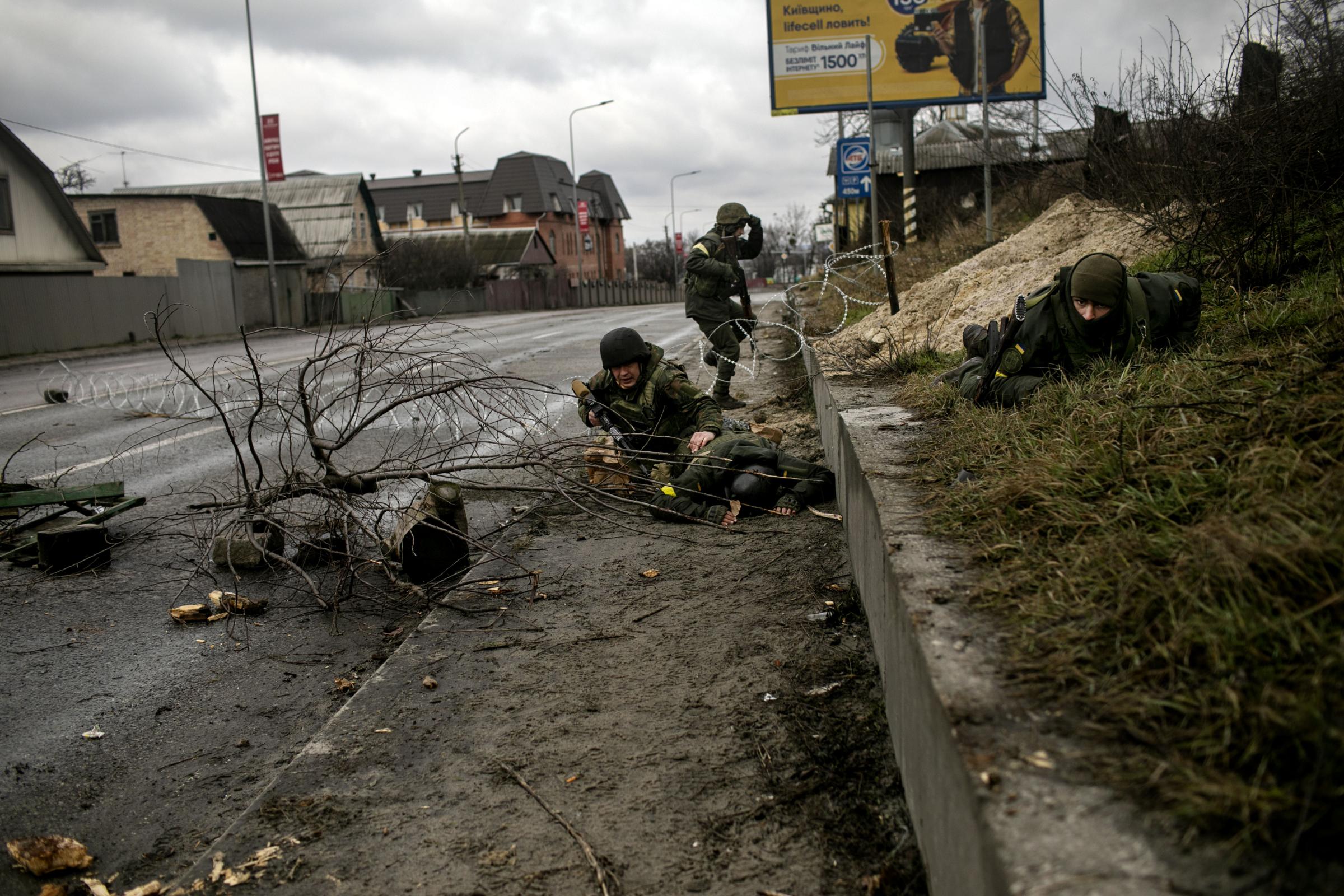 Ukrainian soldiers take cover during heavy shelling by Russian forces at the entrance of Hostomel city.
On 24 February 2022, the first day of the 2022 Russian invasion of Ukraine, Hostomel and the Hostomel Airport were  attacked by the Russian military during their attempt to capture the whole town. Initially, Ukrainian counter offensives were unable to retake the town but a major Russian withdrawal from Kyiv Oblast in late March and early April saw Hostomel completely retaken from the Russian occupiers. 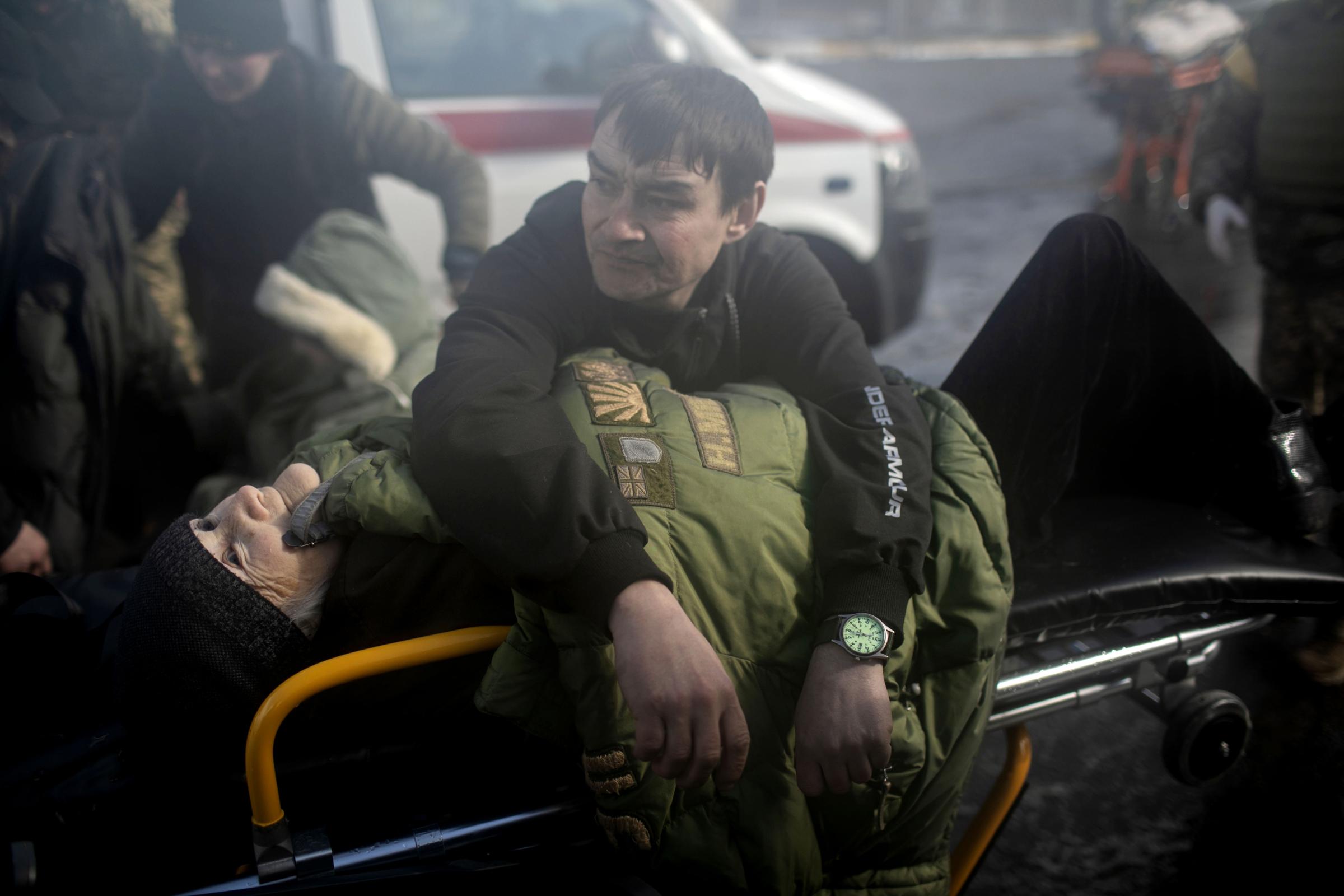 A volunteer keeps an elderly woman warm during the evacuation of civilians from Irpin city. Irpin became the site of a battlefield engagement during the Kyiv offensive.  Russian forces took the Hostomel airport in the north of the city to facilitate an advance southwards, around Kyiv. The city was shelled by Russian artillery while the Ukrainians were able to repel and destroy multiple forces attempting to move into the town. 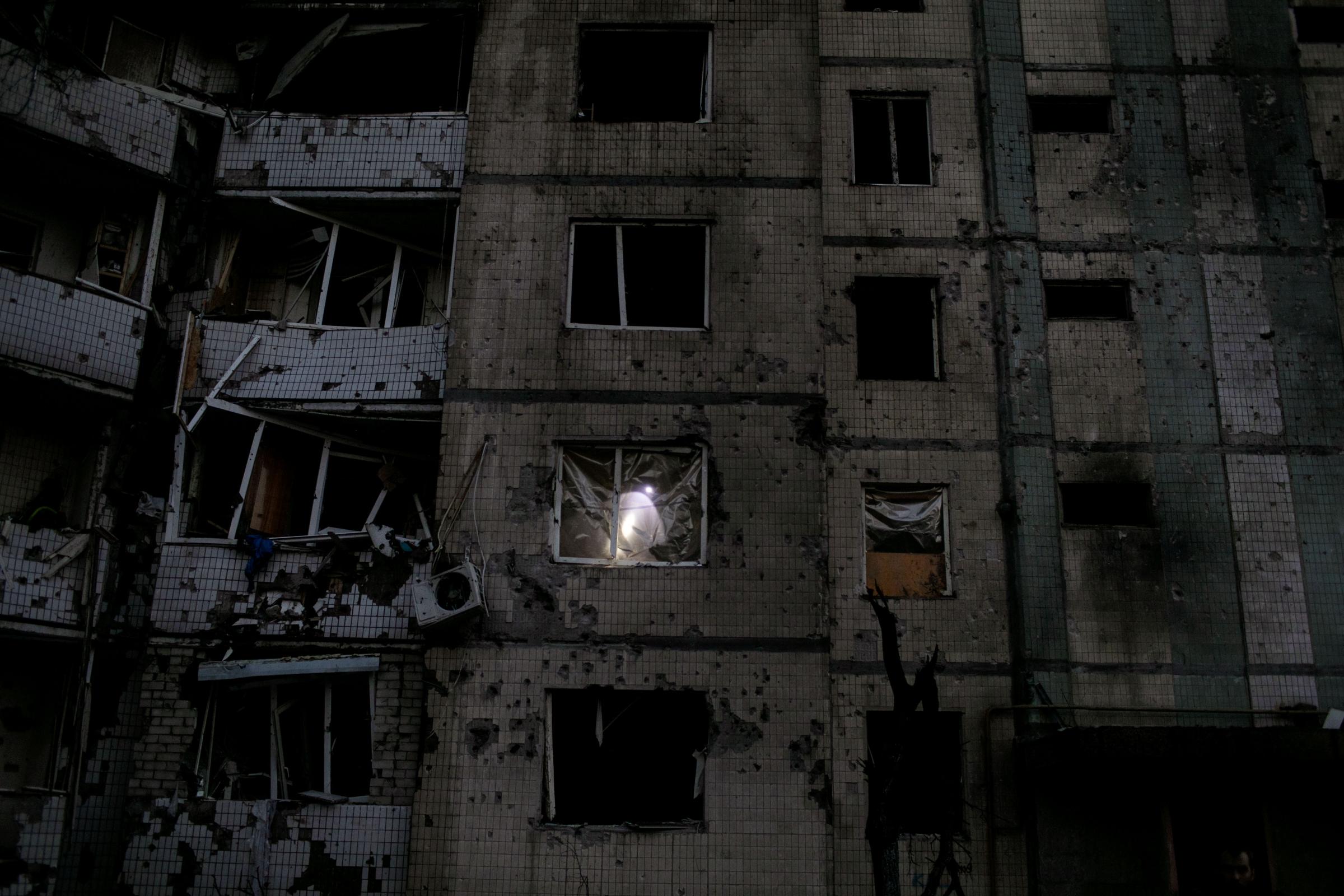 Residents of Kyiv checking the destruction in their apartment in Svyatoshyns'kyi district after Russian shelling. 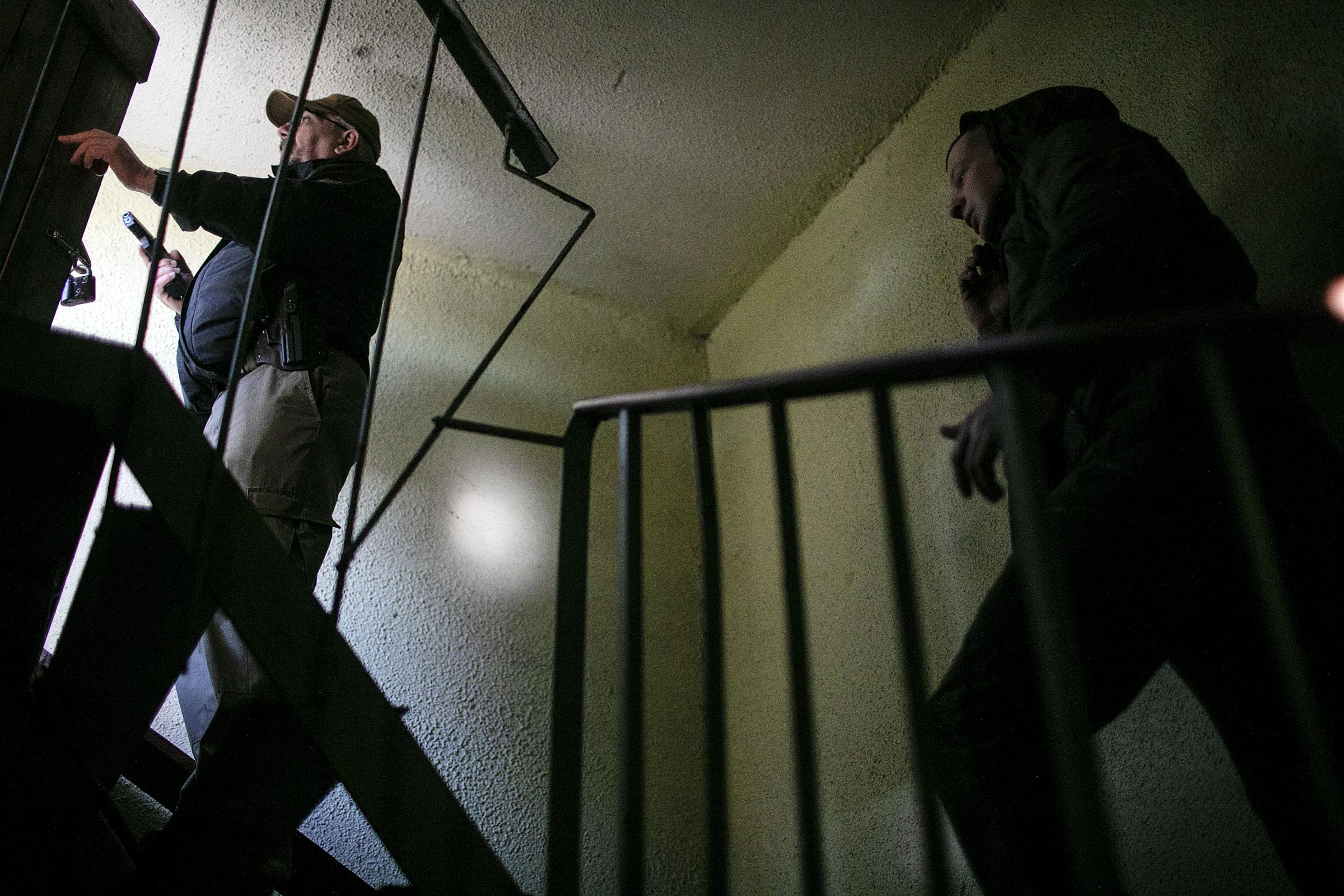 Territorial defence volunteers combing the rooftop of a building in Kyiv, after a suspected saboteur was spotted there. 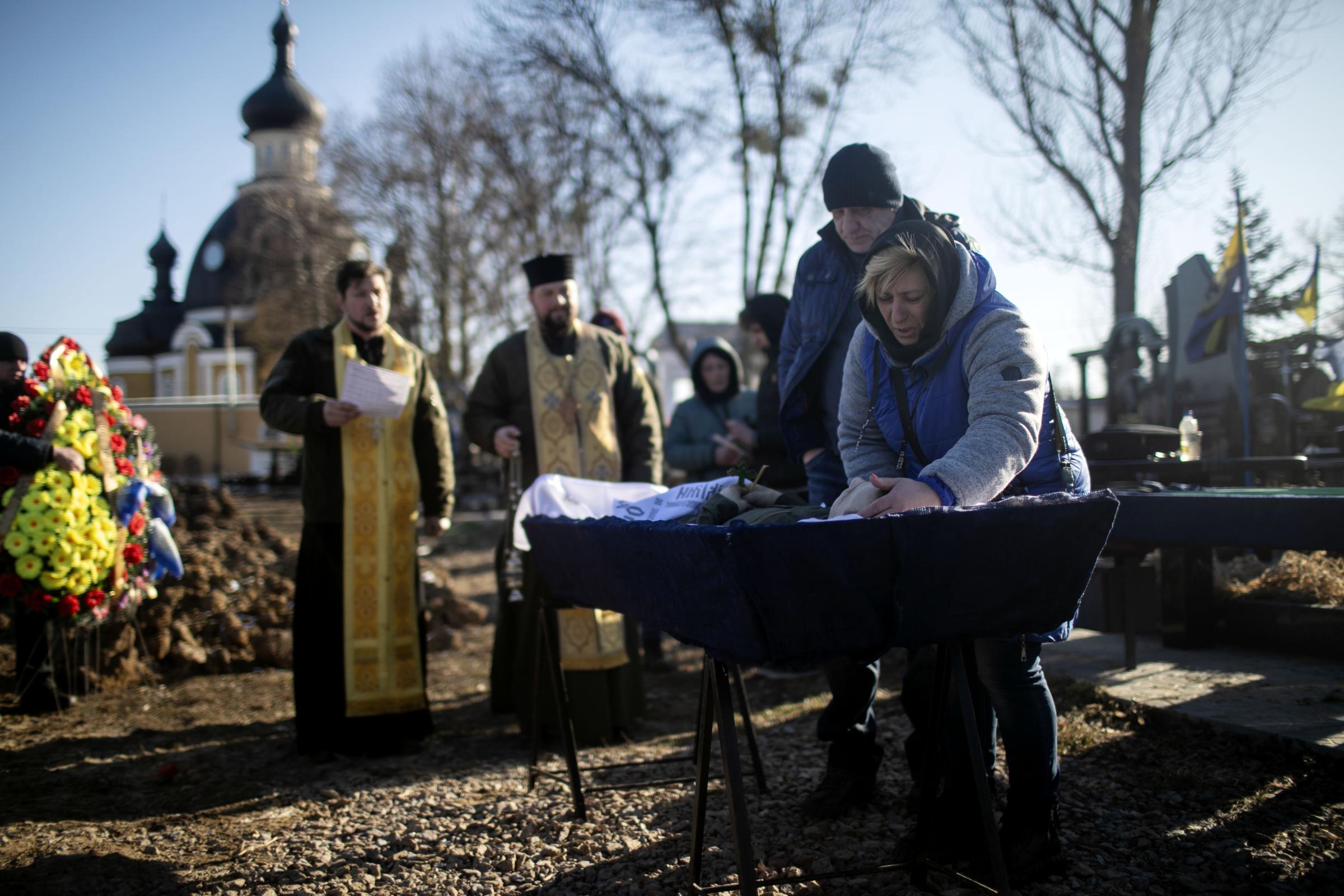 The parents of Yuri (23), a soldier who died fighting Russian forces near Kyiv, mourn over his body during the funeral. 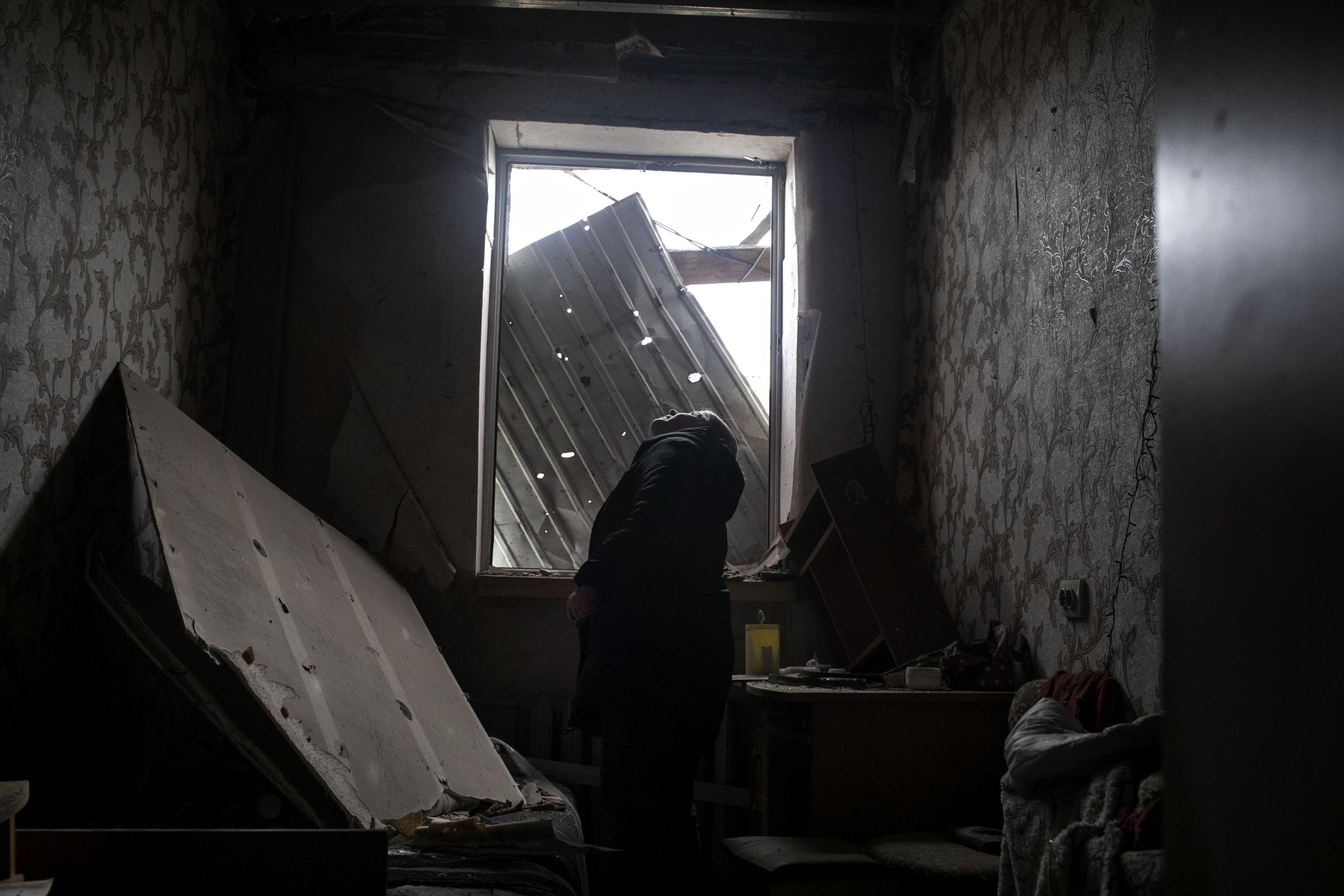 Valeria (19) checking her destroyed apartment, after heavy shelling by the Russian army hit her city of Byshiv, located around 60km south west of Kyiv. 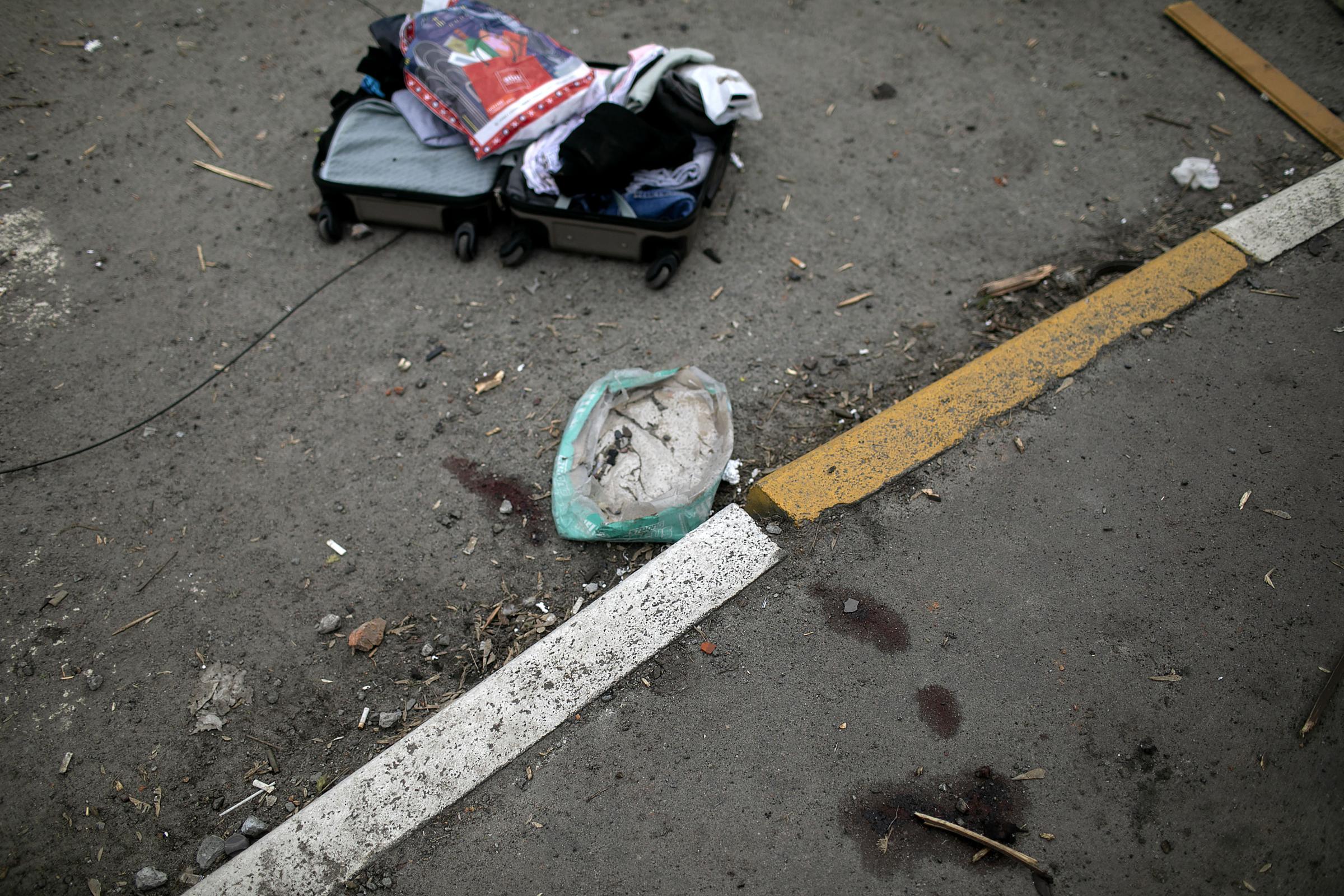 Blood stains show the spot where a civilian was killed the previous day during shelling by the Russian army in the outskirts of Irpin city.
Irpin became the site of engagement during the Kyiv offensive.  Russian forces took the Hostomel airport in the north of the city to facilitate an advance southwards, around Kyiv. Under Russian artillery fire, the Ukrainians were able to repel and destroy multiple forces in their attempts to move into the city. 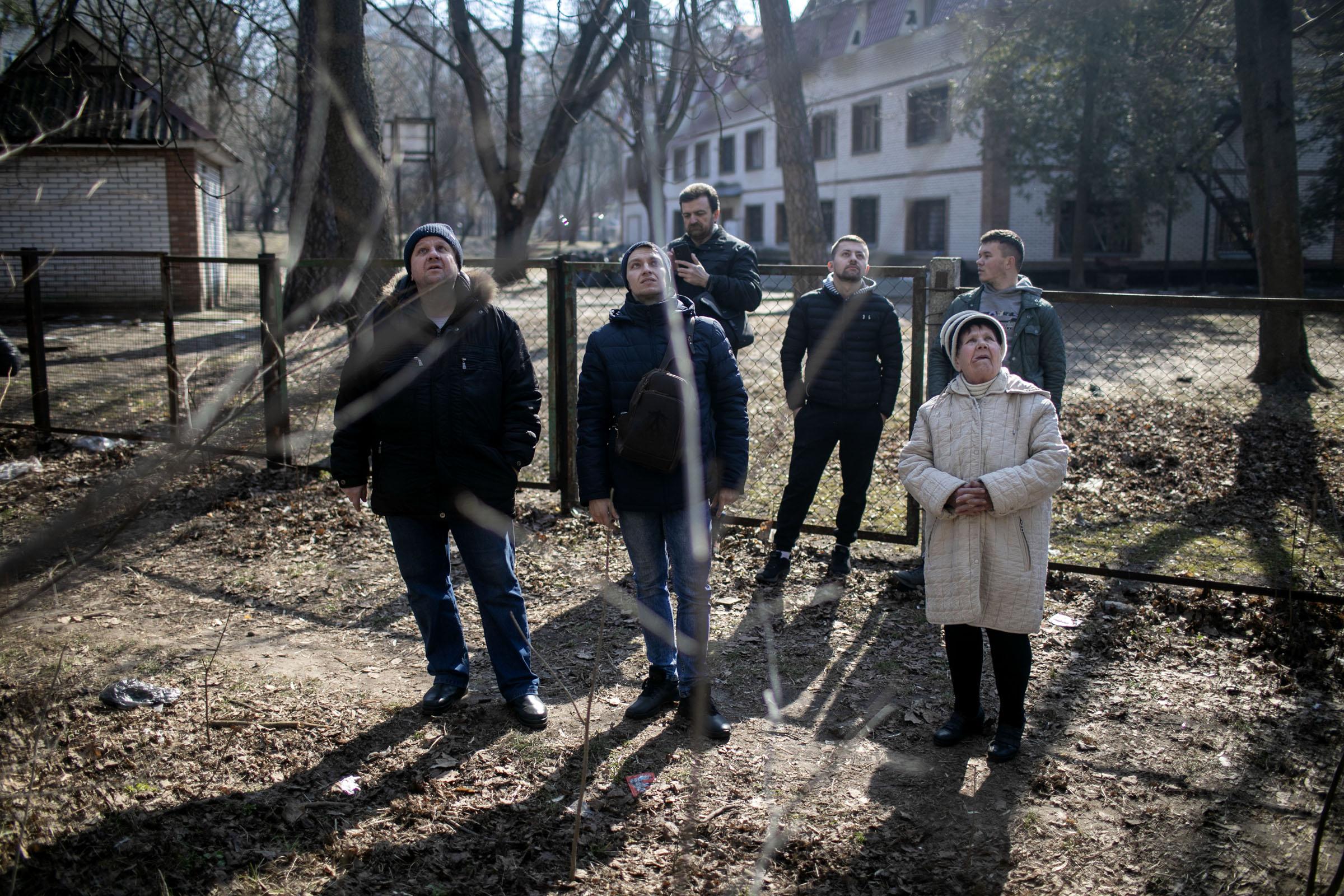 Local residents of Kyiv watching towards a building that was heavily damaged by a Russian rocket shot on the city's northern areas. 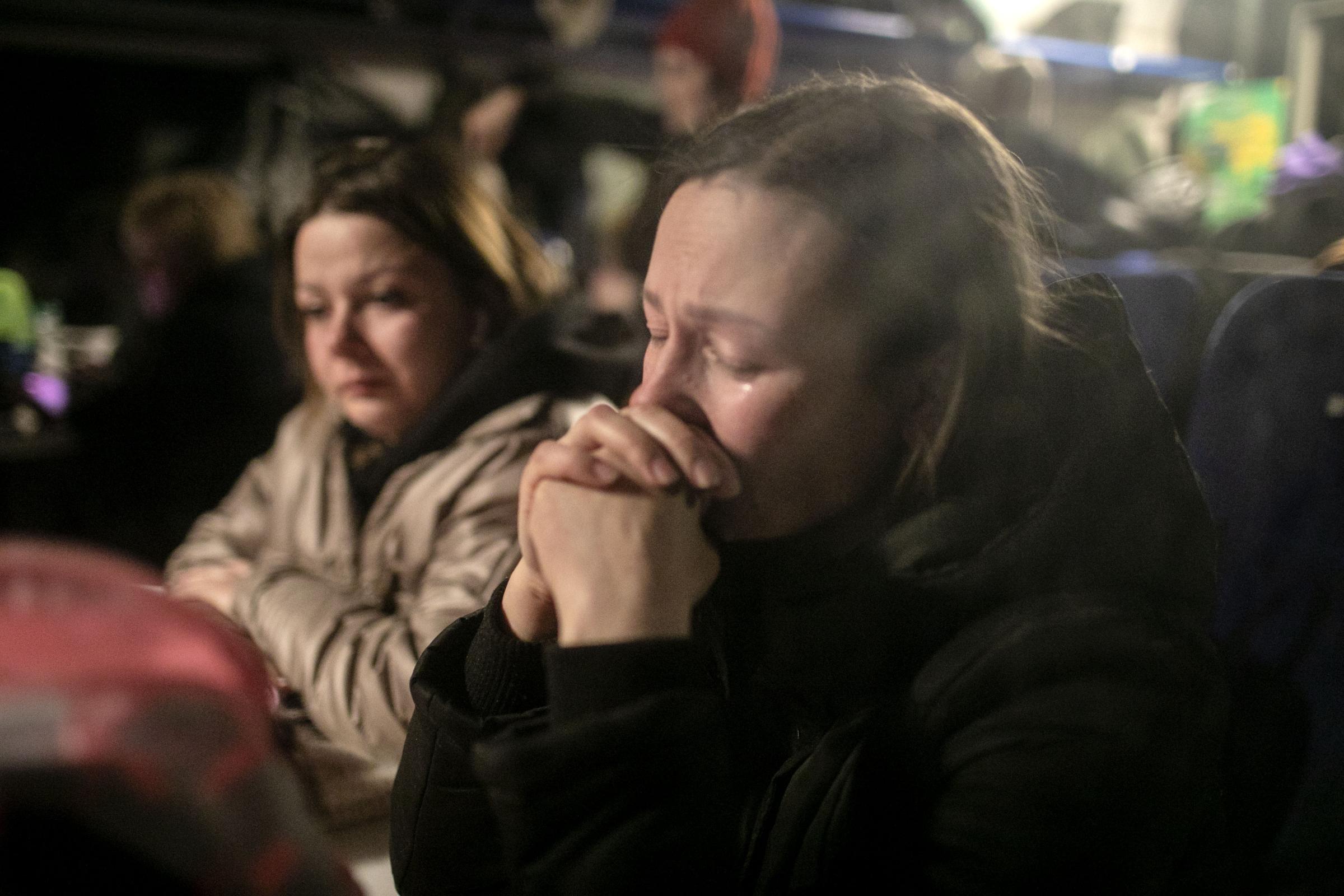 Her sorrow clearly evident, a resident of Kyiv waits in the train station to leave the city with her family, heading towards Lviv. Initially, Russian forces captured key areas to the north and west of Kyiv, leading to international speculation of the city's imminent fall, and an exodus of civilians who fled the city. 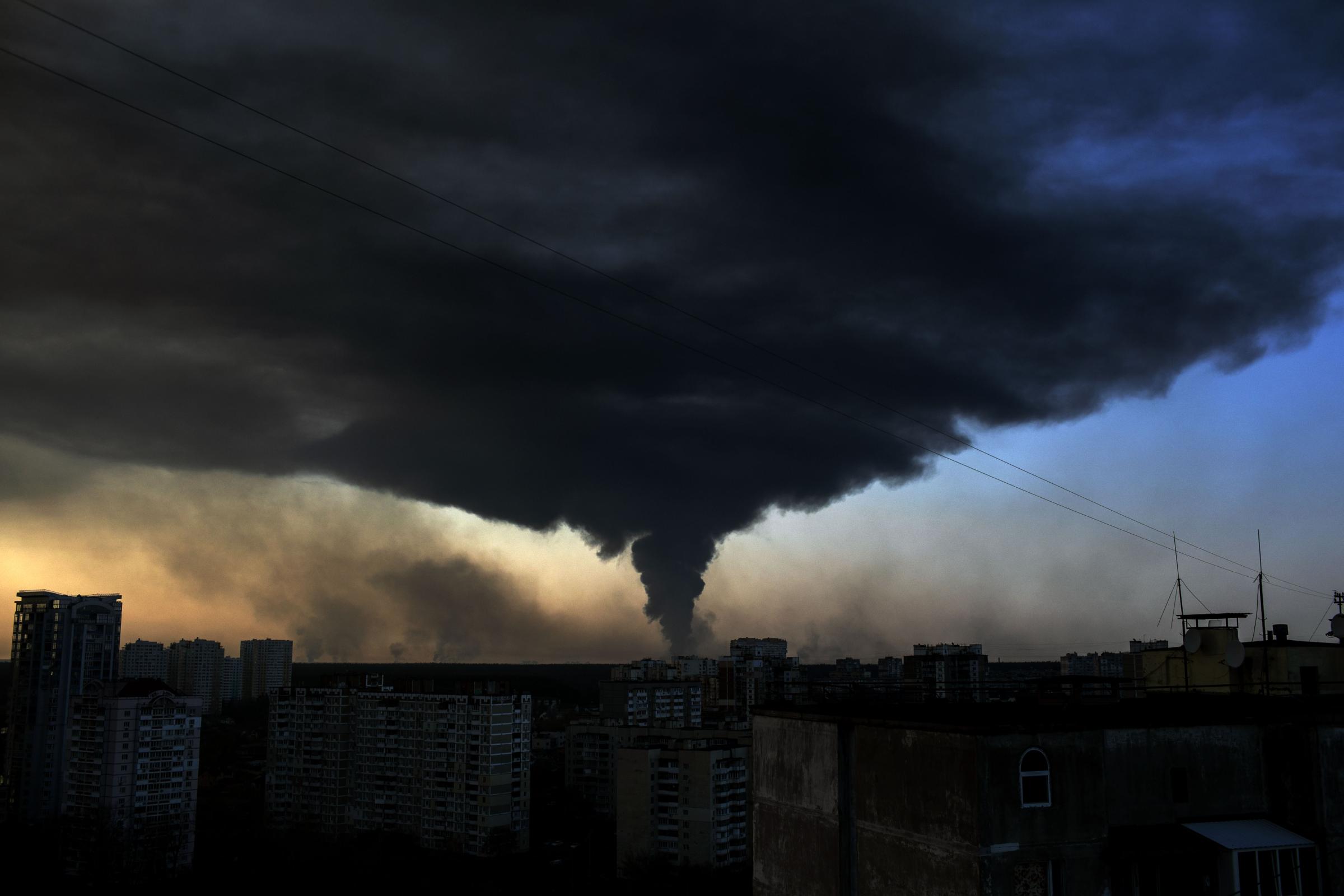 Smoke rises from the cities of Bucha, Irpin and Hostomel near Kyiv during heavy fighting between Russian forces and the Ukrainian army. 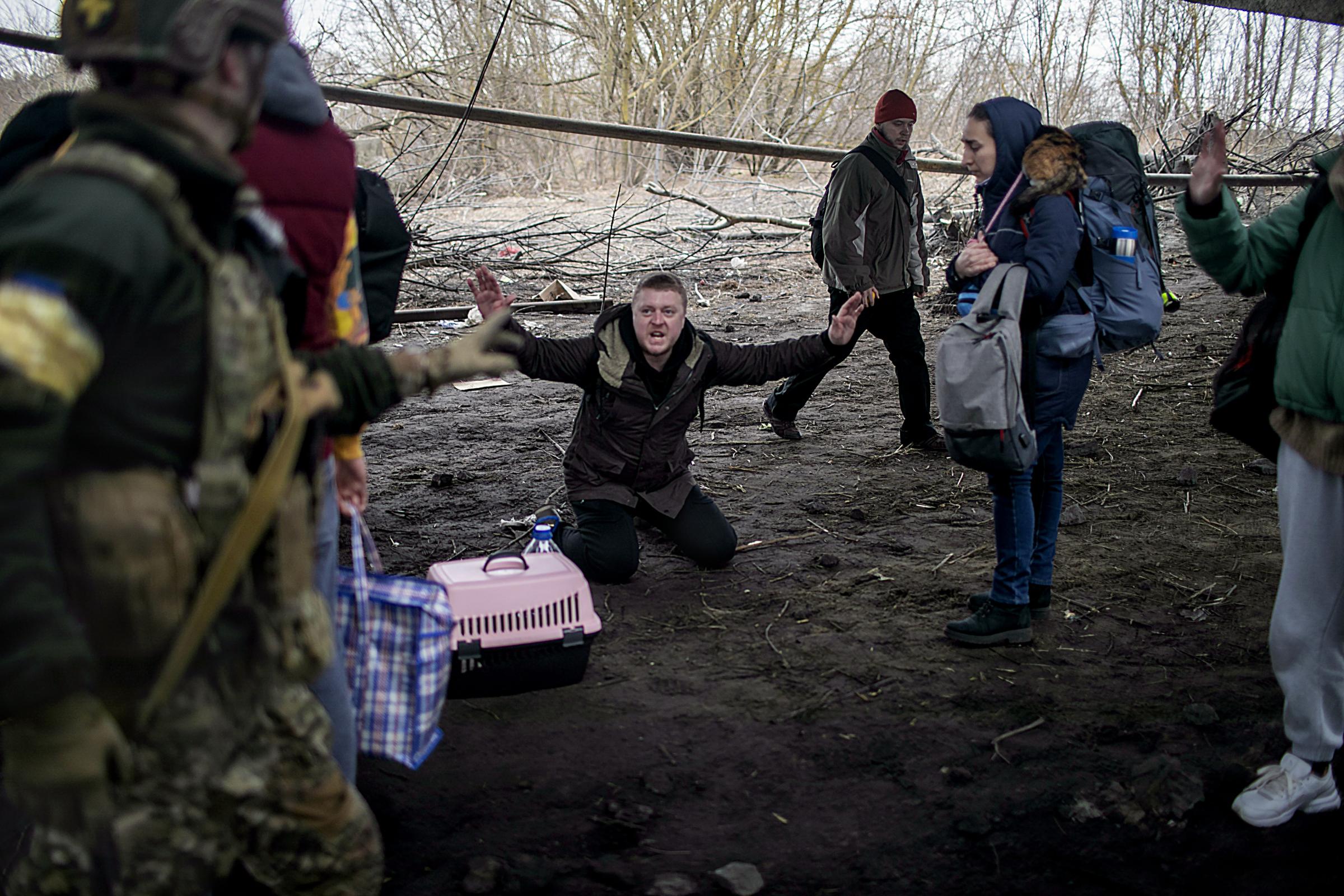 On the outskirts of Irpin city,  a civilian, suspected of being a Russian spy, pleads for his life.
After some terrifying moments he is cleared and given free passage. 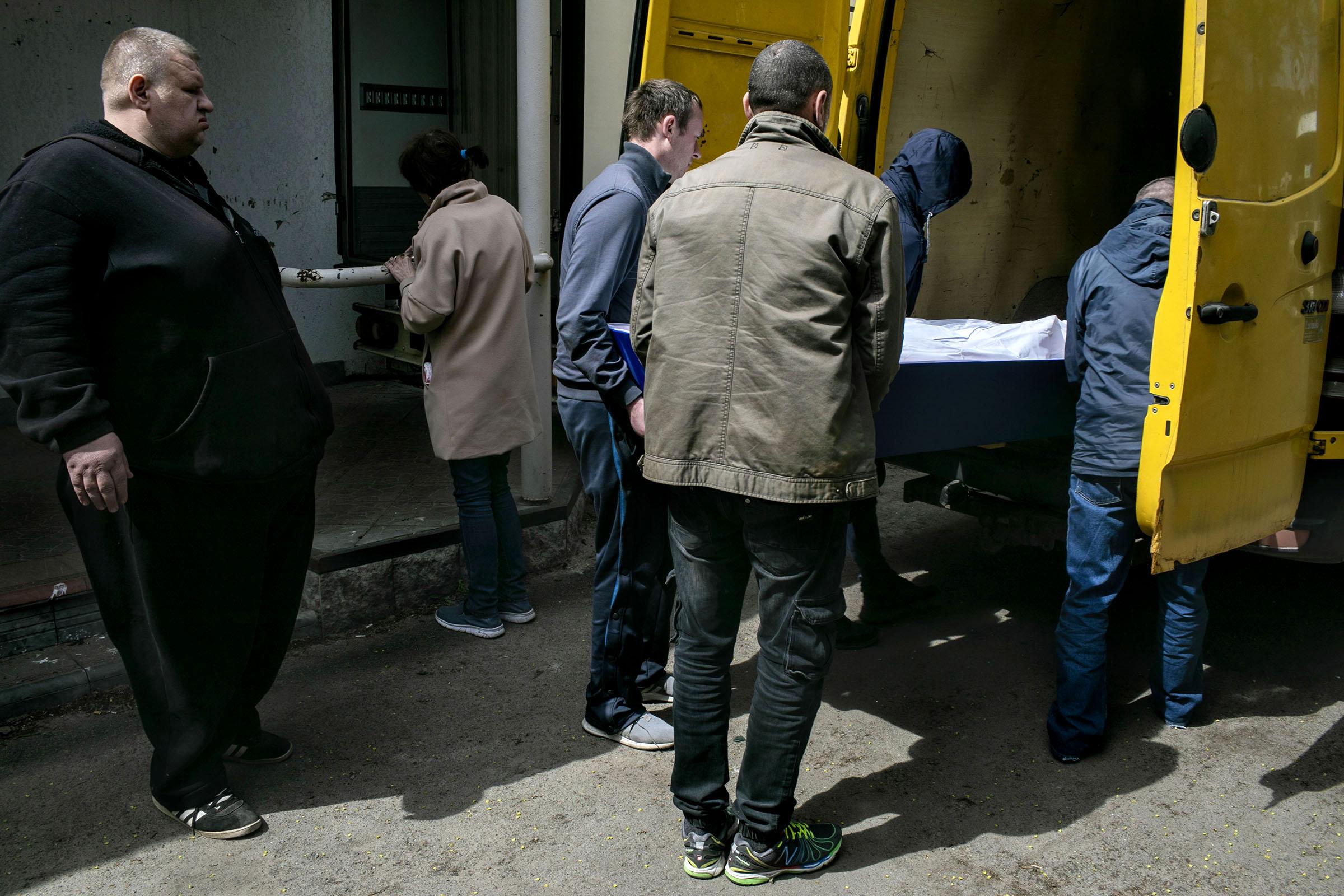 The body of Anatoli Shulhach (75), who was shot by Russian soldiers on March 12 in the village of Sabuchia, is being transferred from the Bucha city morgue to a van, for a reburial. Shulhach died from his wounds 5 days after he was shot. He was buried in Sabuchia, but his body needed to be exhumed, in order to document war crimes committed by Russian soldiers during the occupation of Bucha and its surrounding areas. 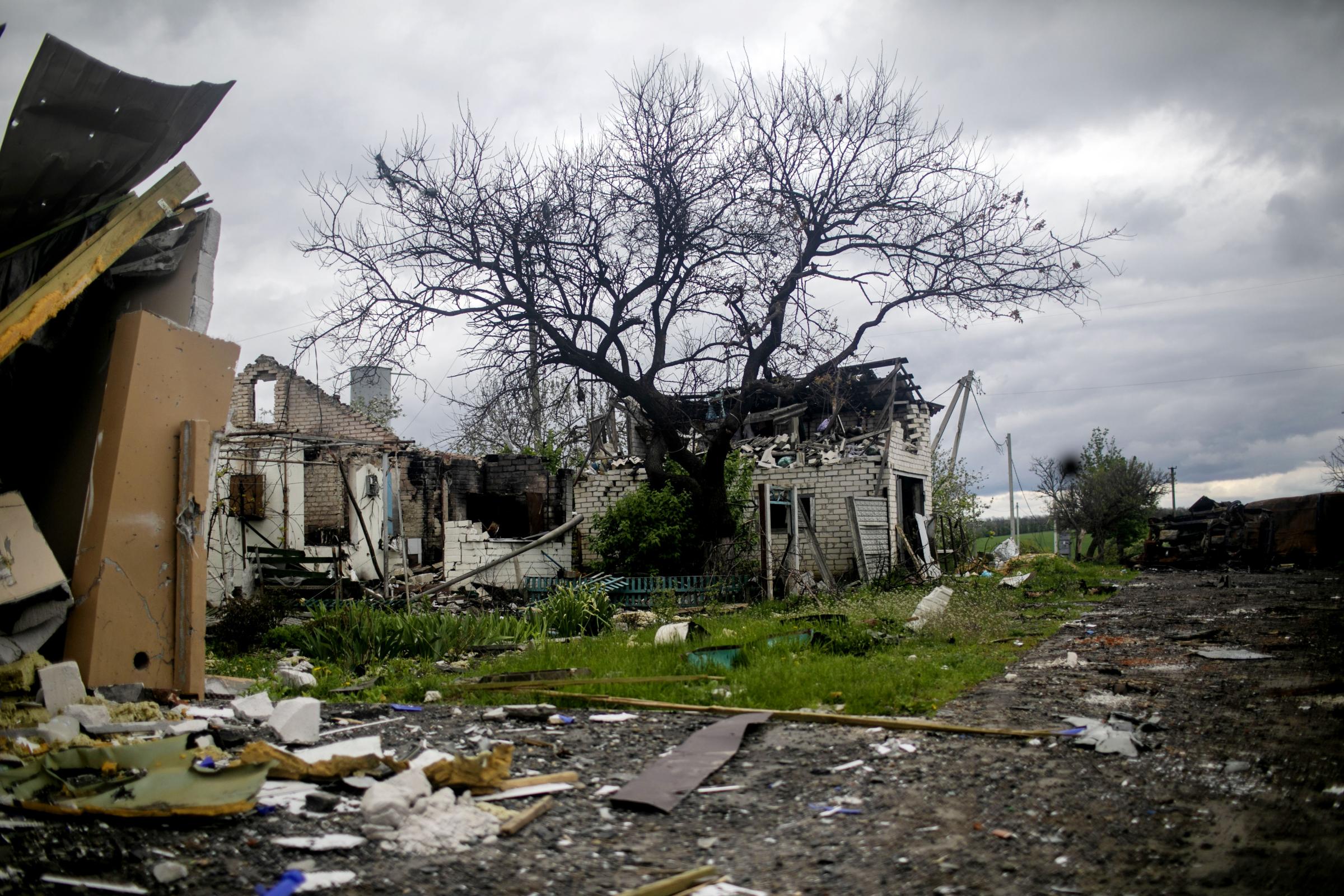 Heavy damaged houses, after Russian army shelling, in the village of Vilkhivka, which was liberated by Ukrainian forces on March 26, 2022. local residents said that around 60-70 people left the village with the reterting Russian army, as they didnt want to stay under Ukrainian rule. 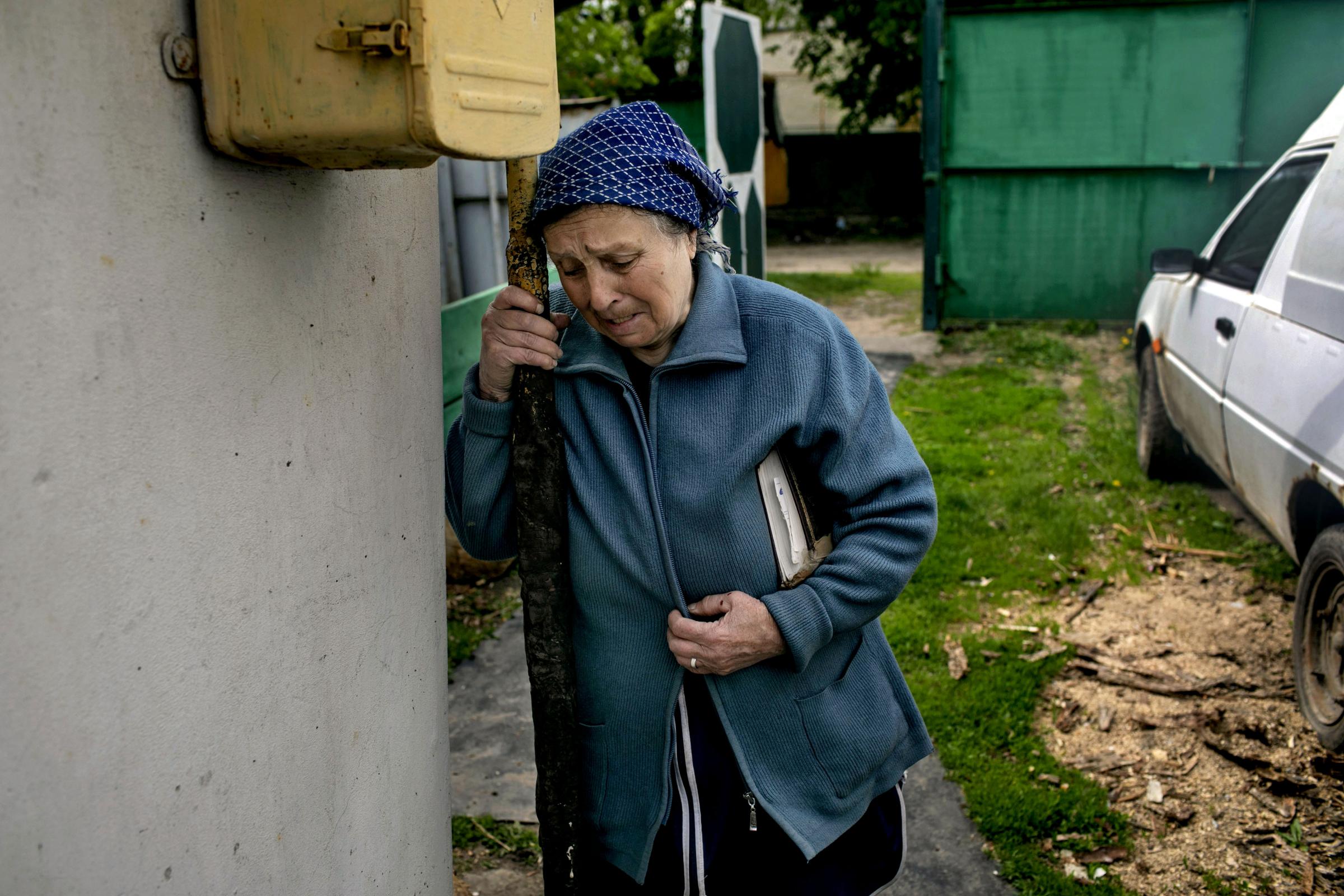 Anastasia Globenka (72) sobes outside her neighbor's home in the Village of Vilkhivka. (on the outskirts of Kharkiv city) , as she and other elder residents struggle to make ends meet, getting food and supplies from volunteers. The village was liberated by Ukrainian forces on March 26, 2022. 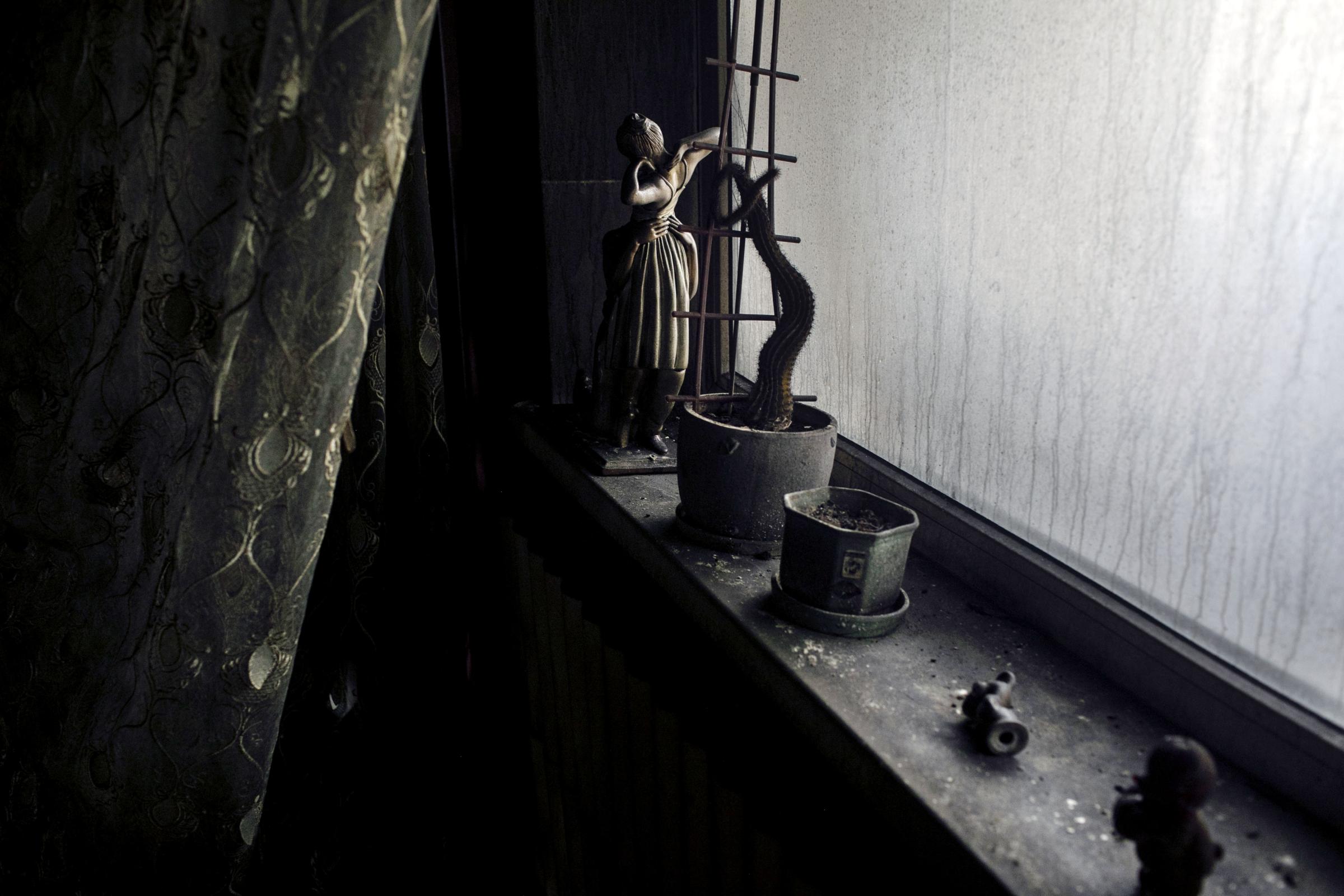 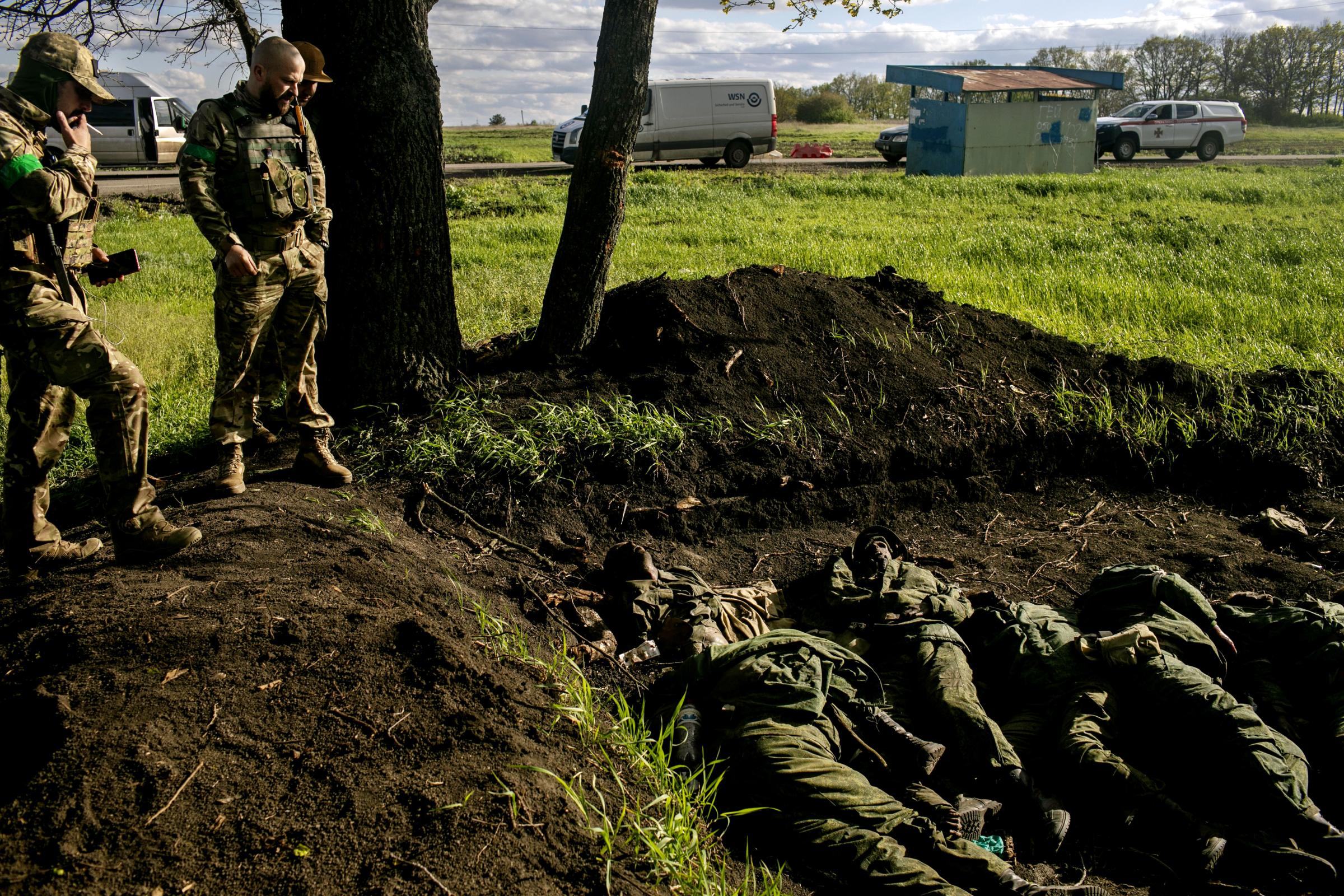 Ukrainian army soldiers looking at the bodies of 11 Russian soldiers in the village of Vilkhivka, recently liberated by Ukrainian forces near Kharkiv city. local residents said that around 60-70 people left the village with the retreating Russian army, as they didn't want to stay under Ukrainian rule.