Caught between the ongoing armed conflict between the Colombian army, the Revolutionary Armed Forces (FARC) and right-wing paramilitaries;the Paez people, also known as the Nasa, have tried different ways to protect themselves . The Nasa are a fiercely independent, autonomous native american people who live for the most part in the Northern parts of Cauca Department of Colombia, territory desired by the different warring parties for the control and development of cash crops.
In the 1980s some Nasa people briefly formed their own armed group, Quintin Lame, to fight back. However, when it became apparent that Quintin Lame was doing more harm than good, it was demobilized.The Nasa then declared themselves ‘actively neutral’ and rejected all forms of violence but their neutrality attracted harassment, kidnappings, murders and massacres of entire communities.
In 2001 The Nasa responded to this violence by organising the ‘Indigenous Guard’, a permanent, nonviolent, civil defense organisation. who stand guard in their territory armed with nothing but ceremonial three-foot batons.
At present the Guard has about 6,000 active members charged with protecting communities by preventing the incursion of armed groups into the tribe’s territorial reserves.
The Nasa people focus on building a self-sustaining community held together by an overarching philosophy of self-determination and the right to be left alone. The absence of a police force or army in some areas due to the ongoing conflict makes it necessary for the Nasa community to take care of law enforcement on their own. 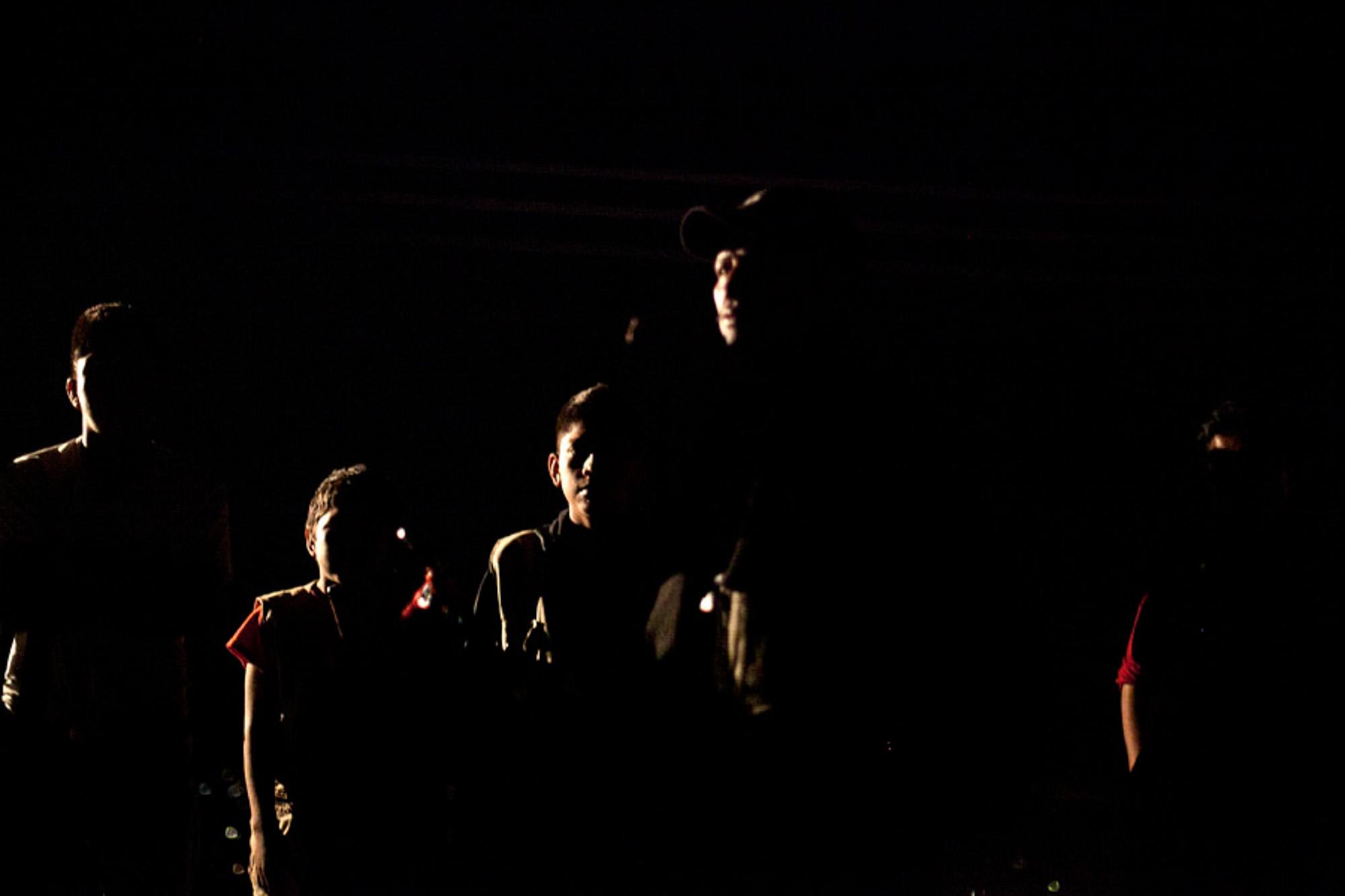 Members of the Guardia (Nasa guard) , some as Young as 15, before heading gout on a night patrol, Miranda , North Cauca. 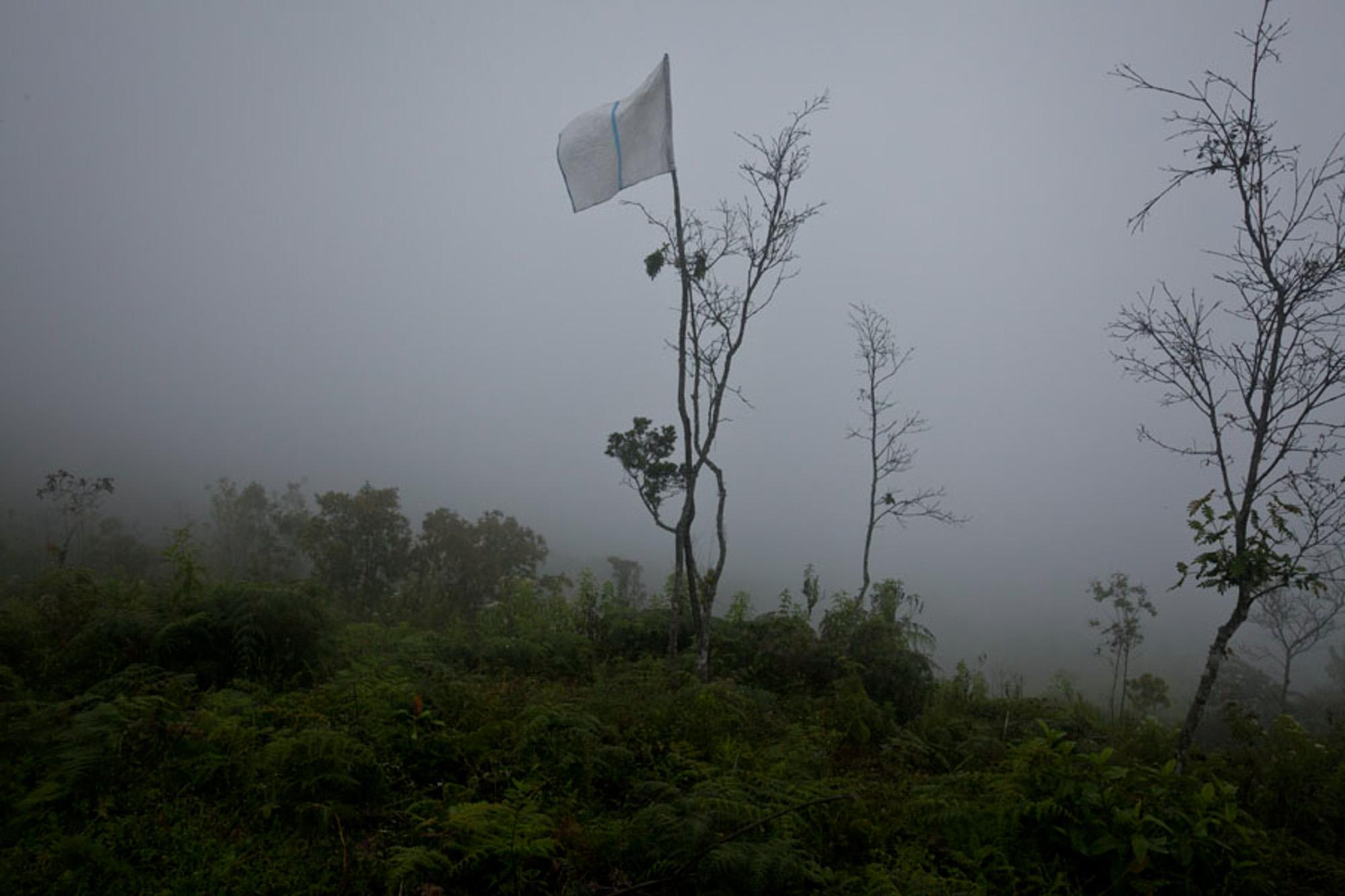 A white flag, marking the border between the area controlled by the Nasa and the Colombian army, on Mt Berlin, a disputed area. Toribio, North Caucain during July 2012 Indigenous activists stormed the hill top military base (on Mt Berlin) in protest over land rights. 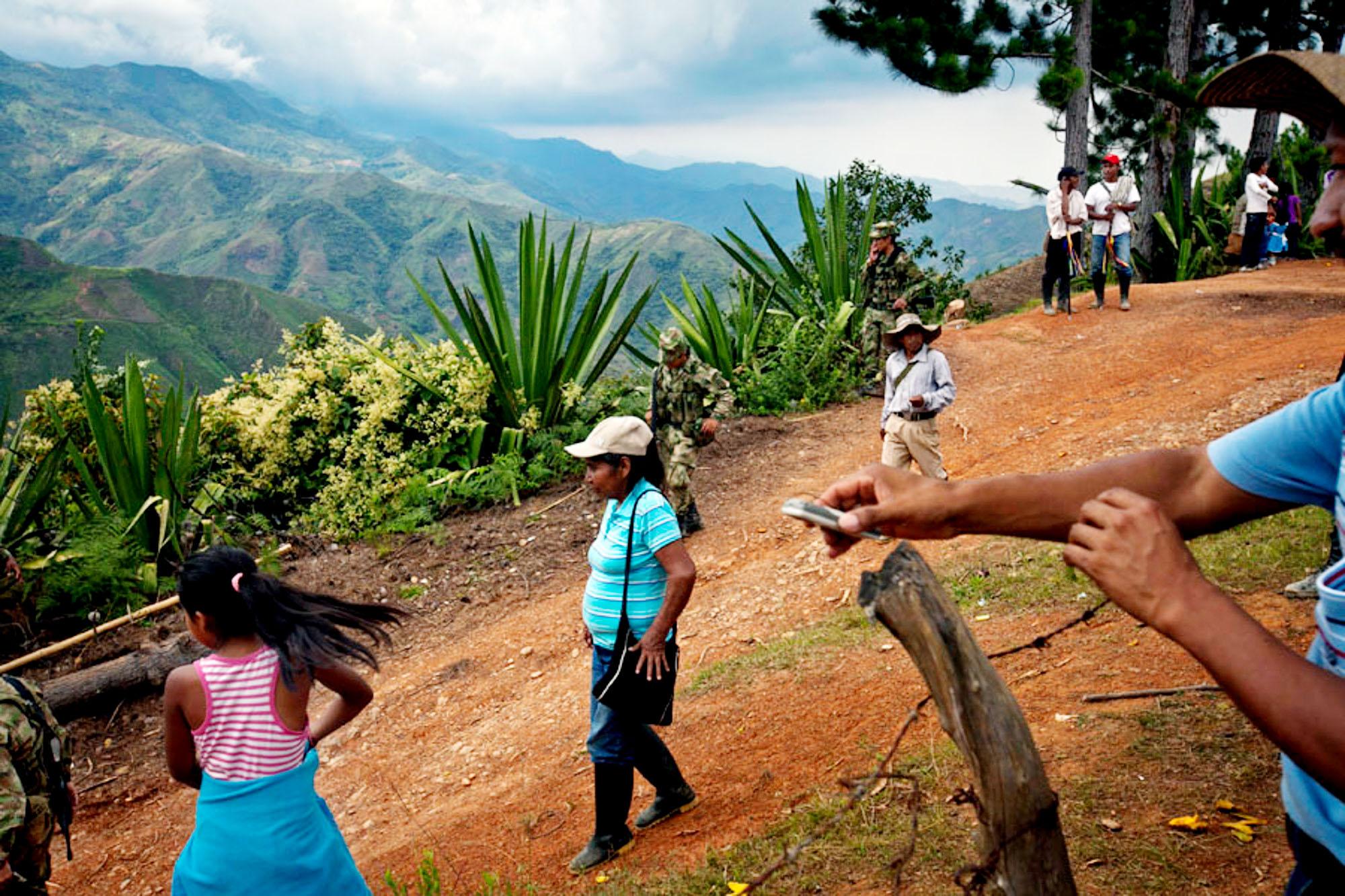 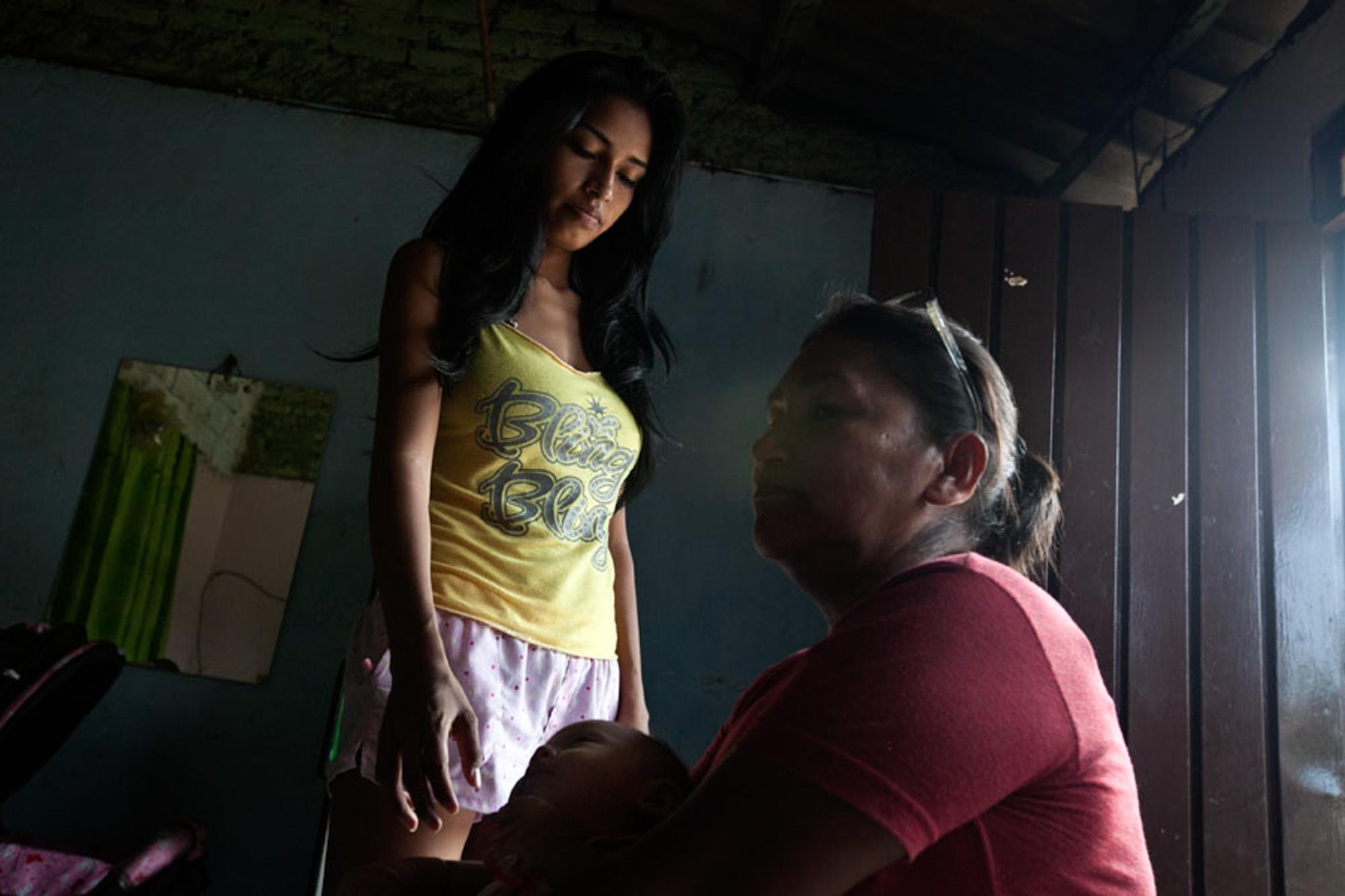 Abelina Ascue (52, right) her daughter in-law and grandchild  (both members of the Nasa community), Mujica, Cali.the family is displaced from Taquyo, North Cauca , since February 2006. 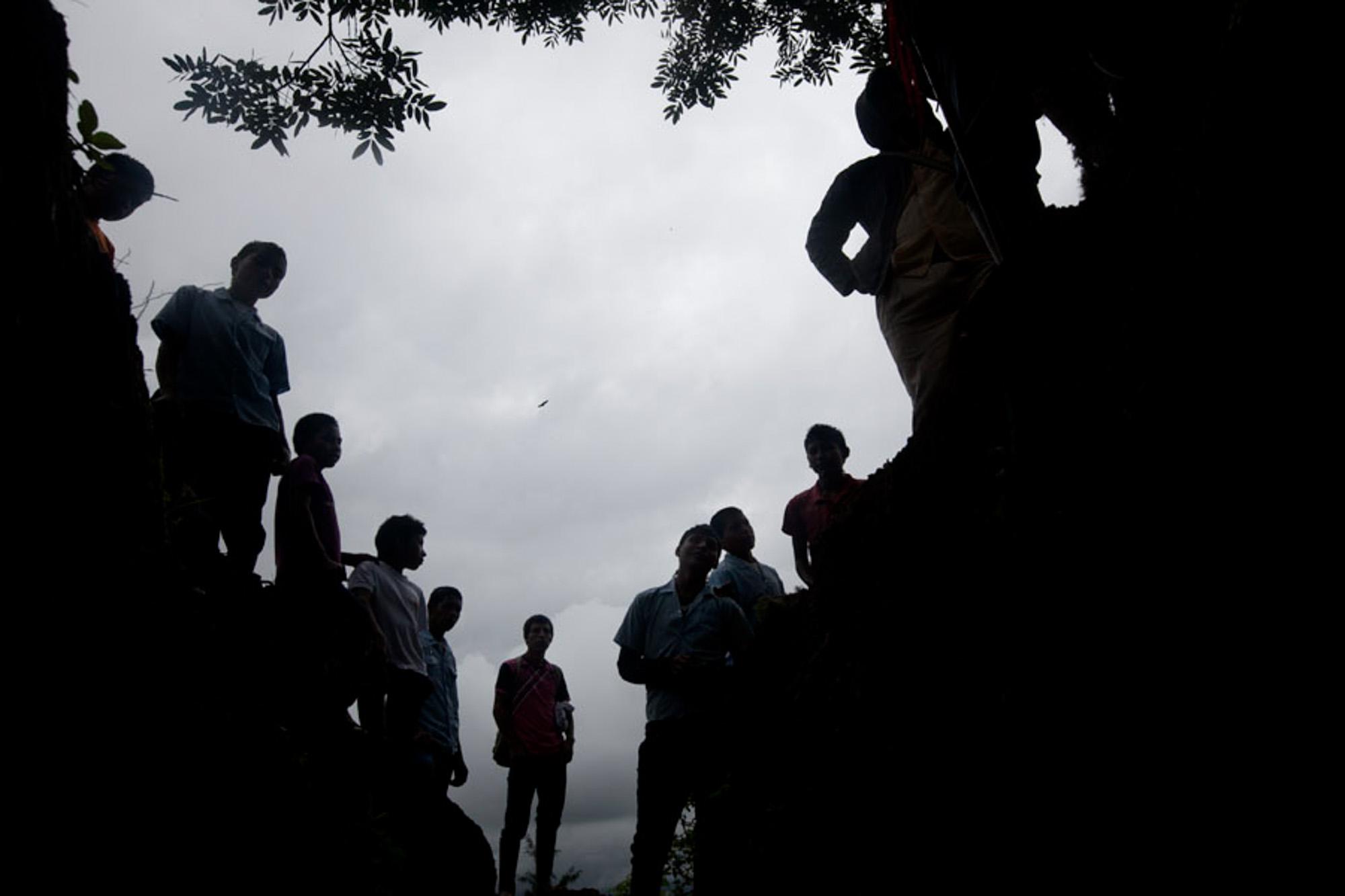 Nasa people stand infant of an illegal mine , which the local leadership decided to shutdown, Canoas, North Cauca. 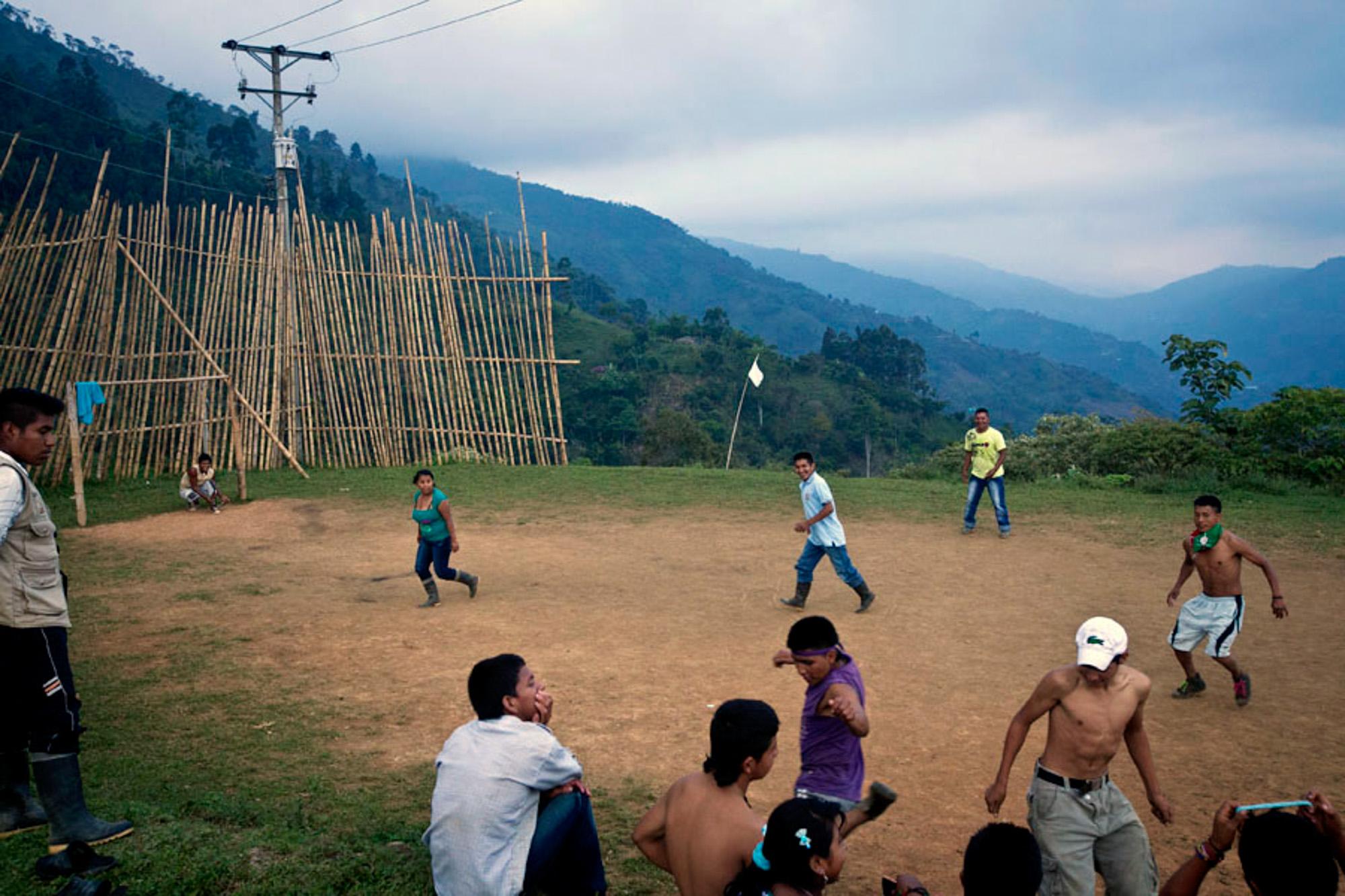 Members of the Nasa guard playing soccer, on a hilltop patch of land which was controlled by the Colombian army ... the people pushed the army out of their posts ion order. to pacifay the area from the ongoing conflict, as there is a large  Nasa communitynear by, Miranda, North Cauca. 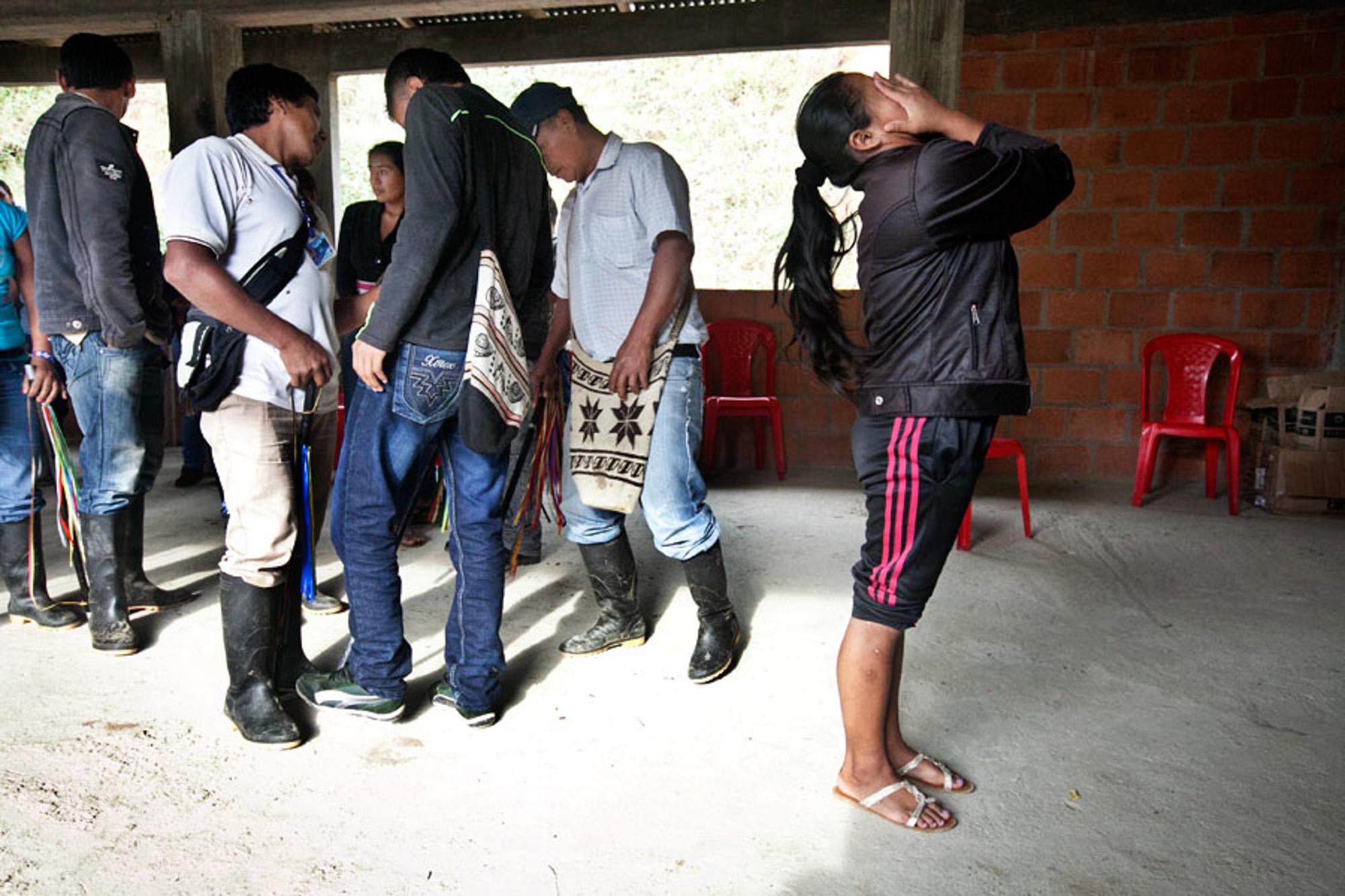 A Nasa woman who deserted her 4 years old daughter to die in a nearby forest since she was retarded , waiting to be whipped  30 times as a punishment. her husband was sentenced to 8 years in jail. Taquayo, North Cauca. 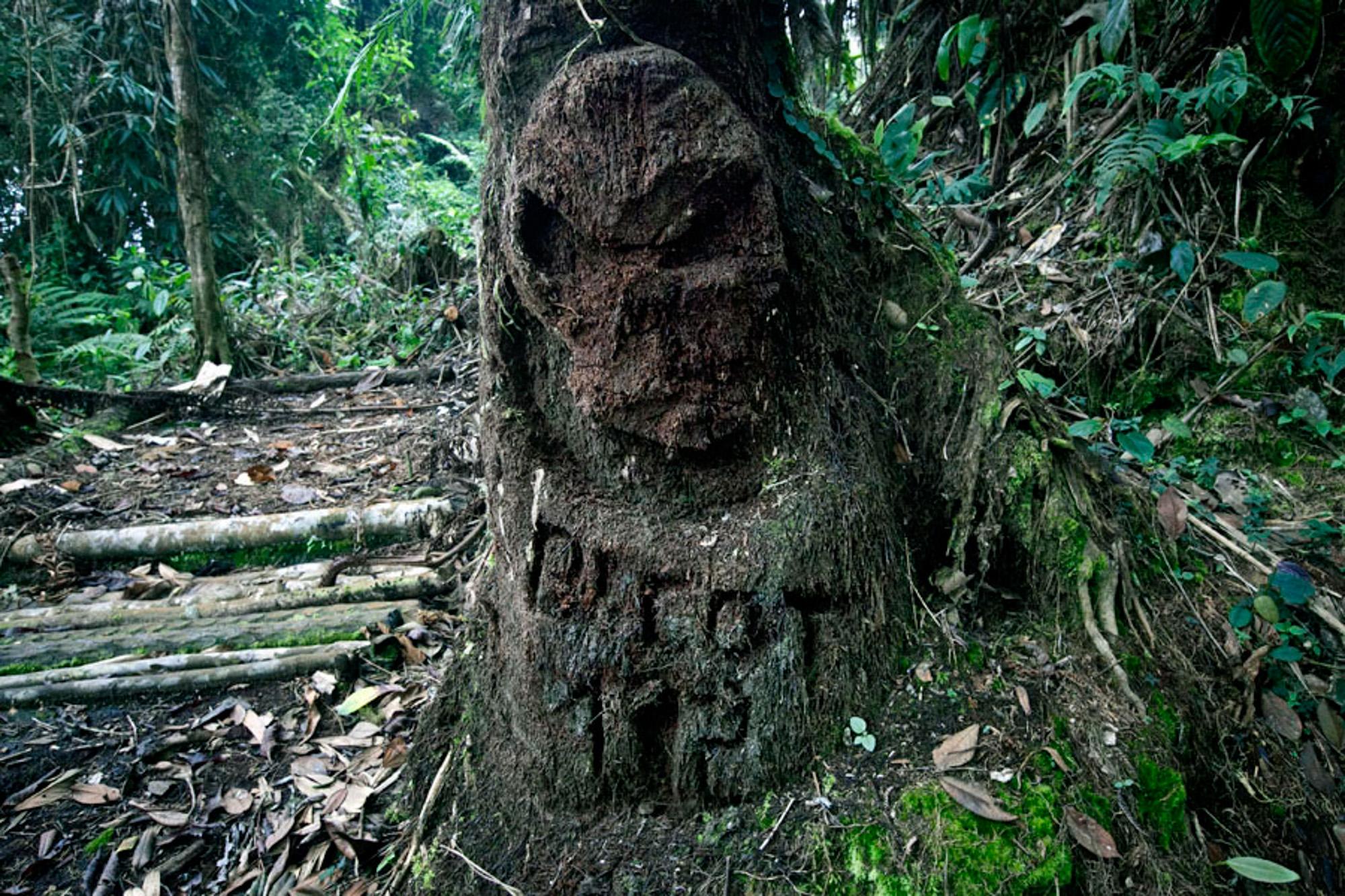 A skull shape engraved on a tree, in order to scare out Nasa people from parts of the jungle areas, where the Colombian army is camping, Miranda, North Cauca. 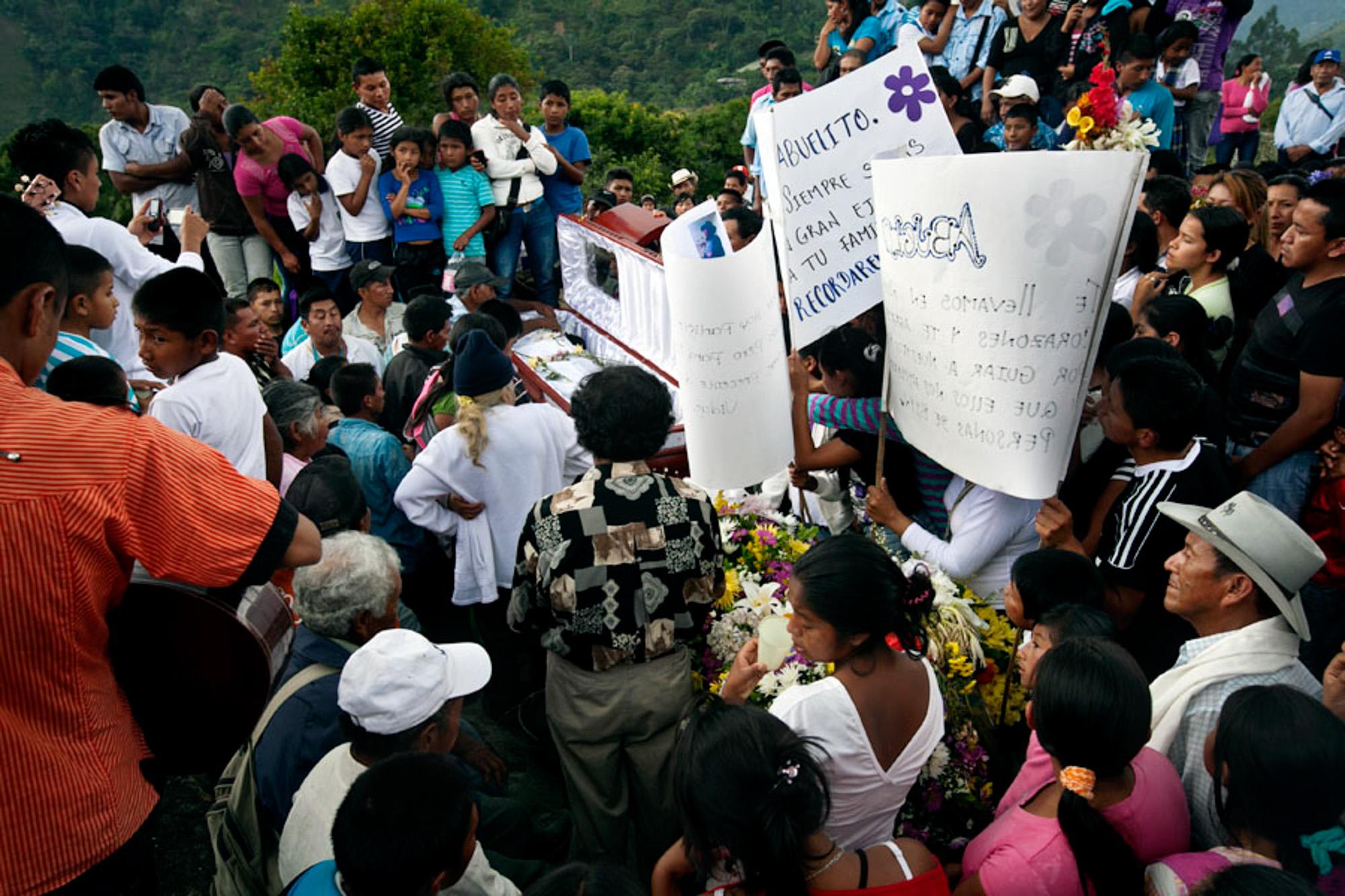 The funeral procession of Abelino, an 88 years old man who passed away from old age. Taquayo, North Cacua. 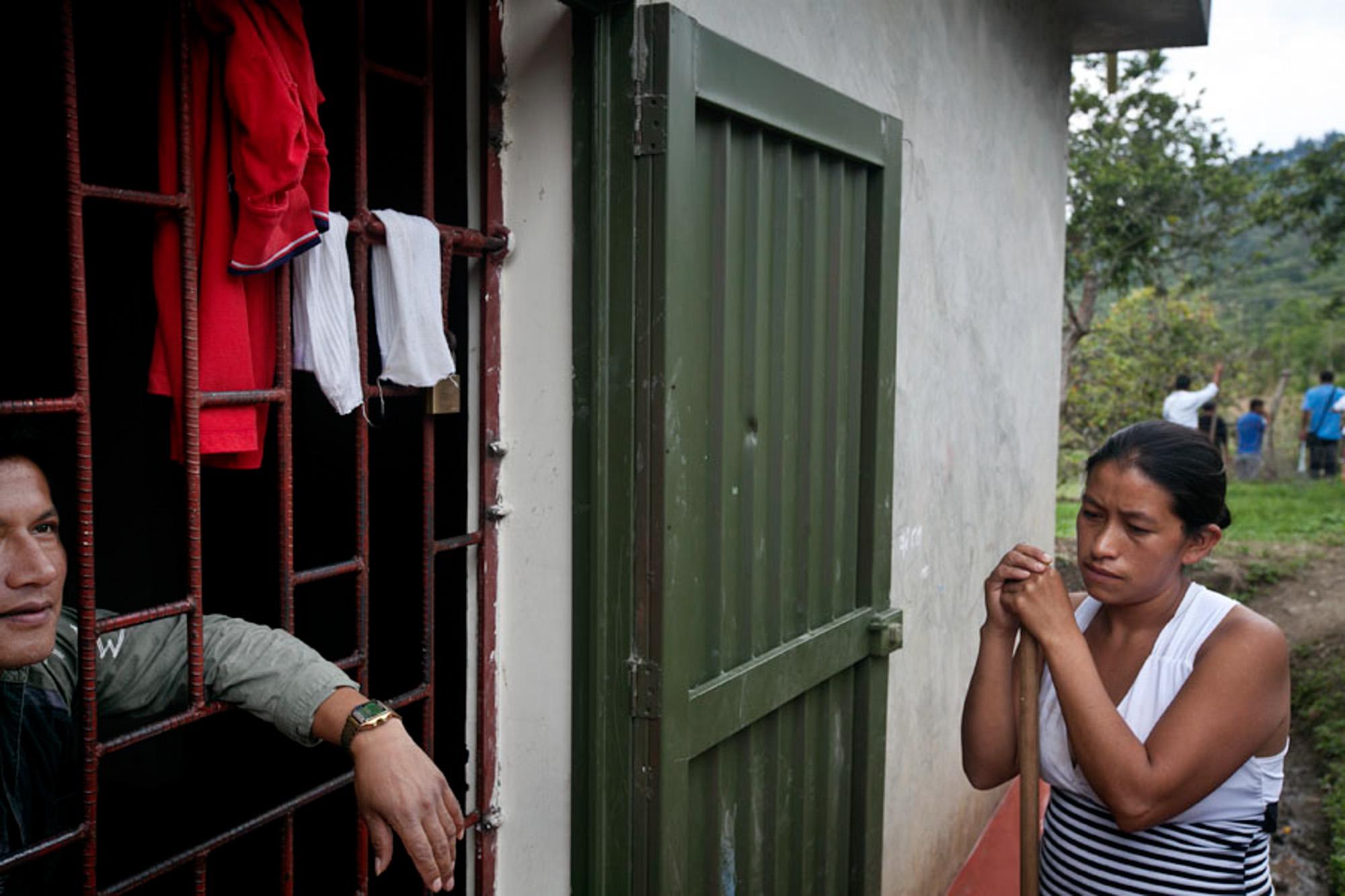 A Nasa man who was extorting  a family in Taquayo, threatening to kill the entire family, awaiting his transfer to the police station in Toribio North Cauca.in some areas of Cauca there is no police/army presence. making the Nasa community take care for the law informant on their own. 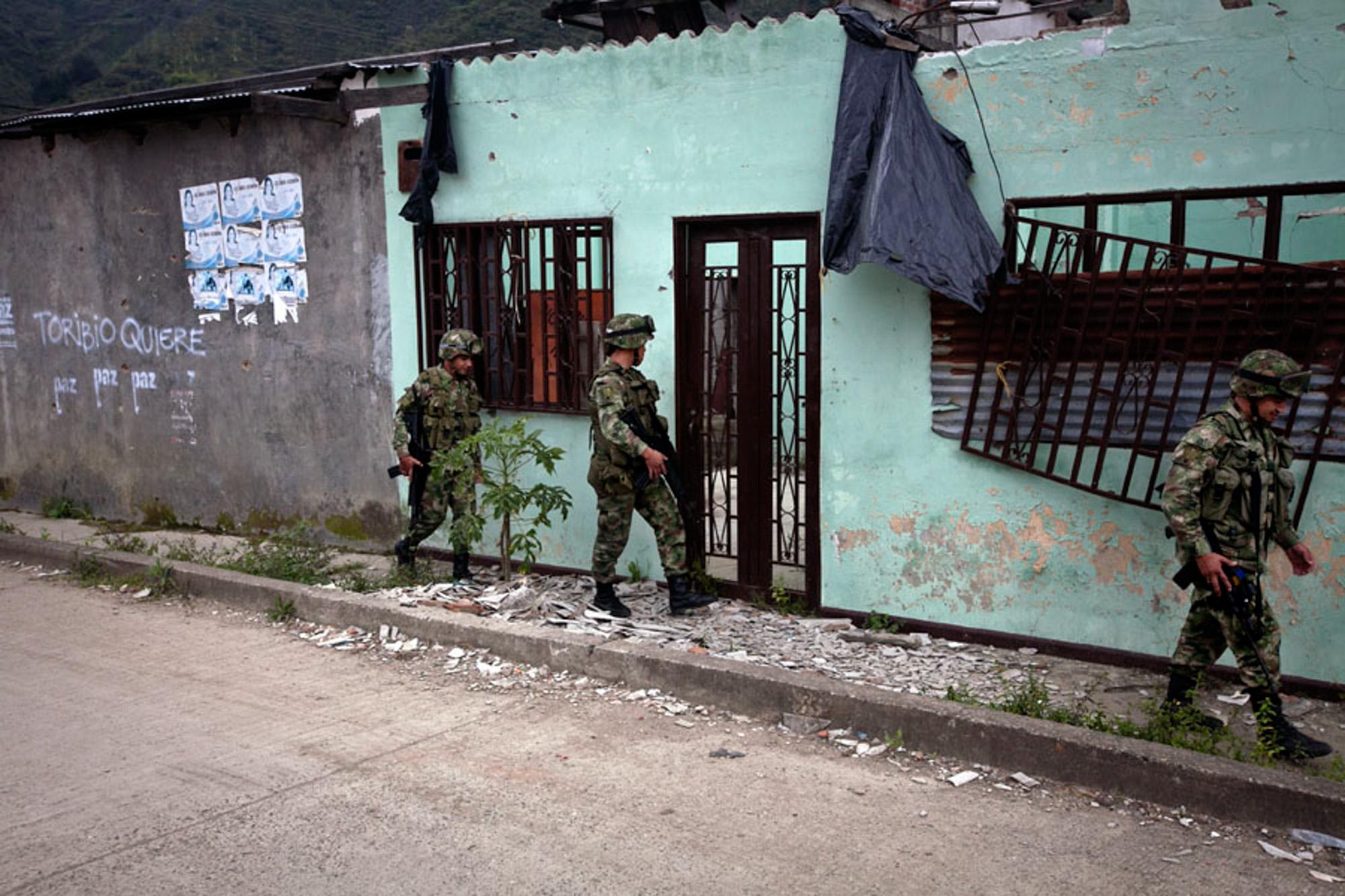 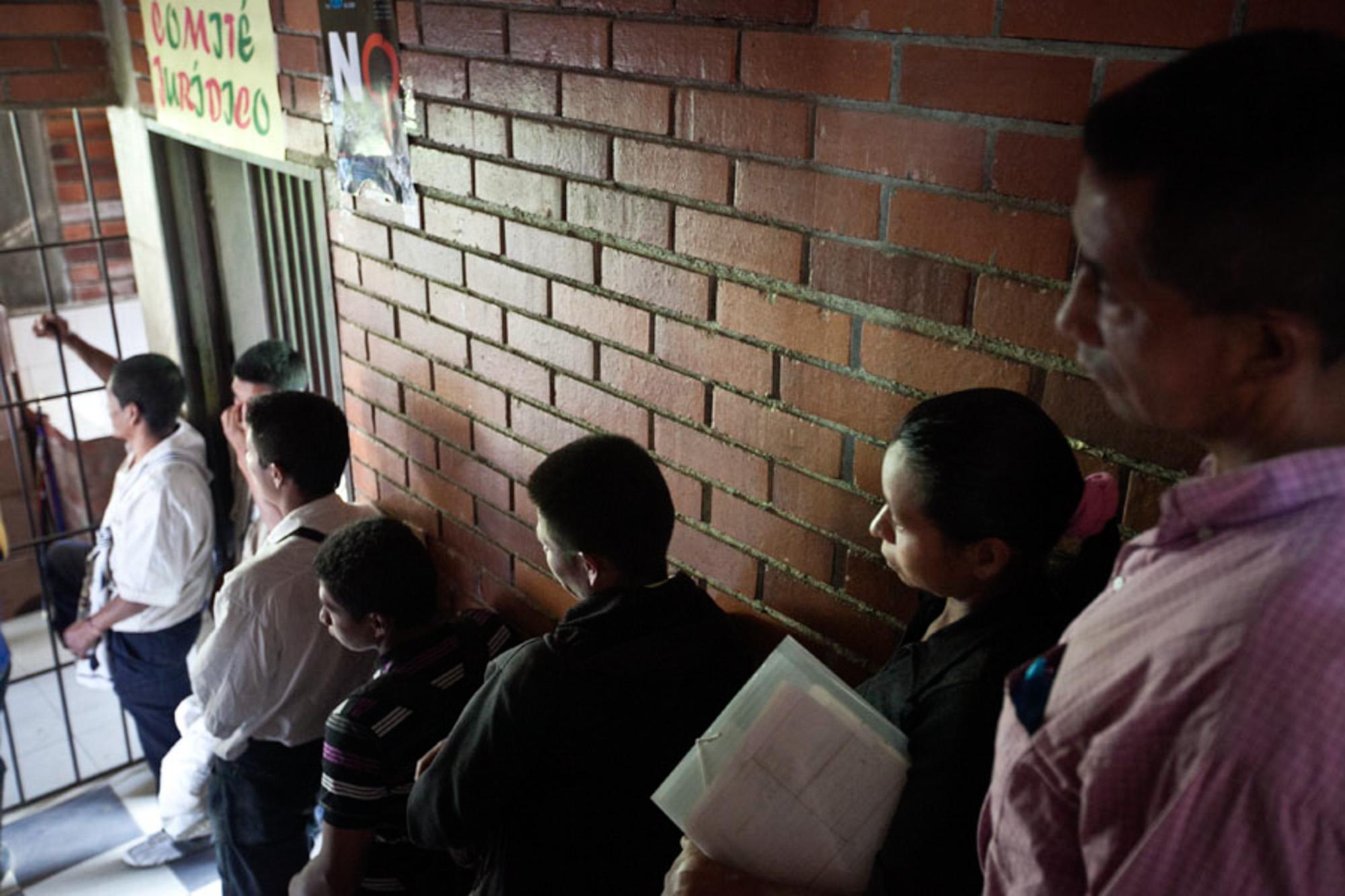 People affected by the conflict, waiting for food distribution by the Nasa guard, Taquayo, North Cauca. 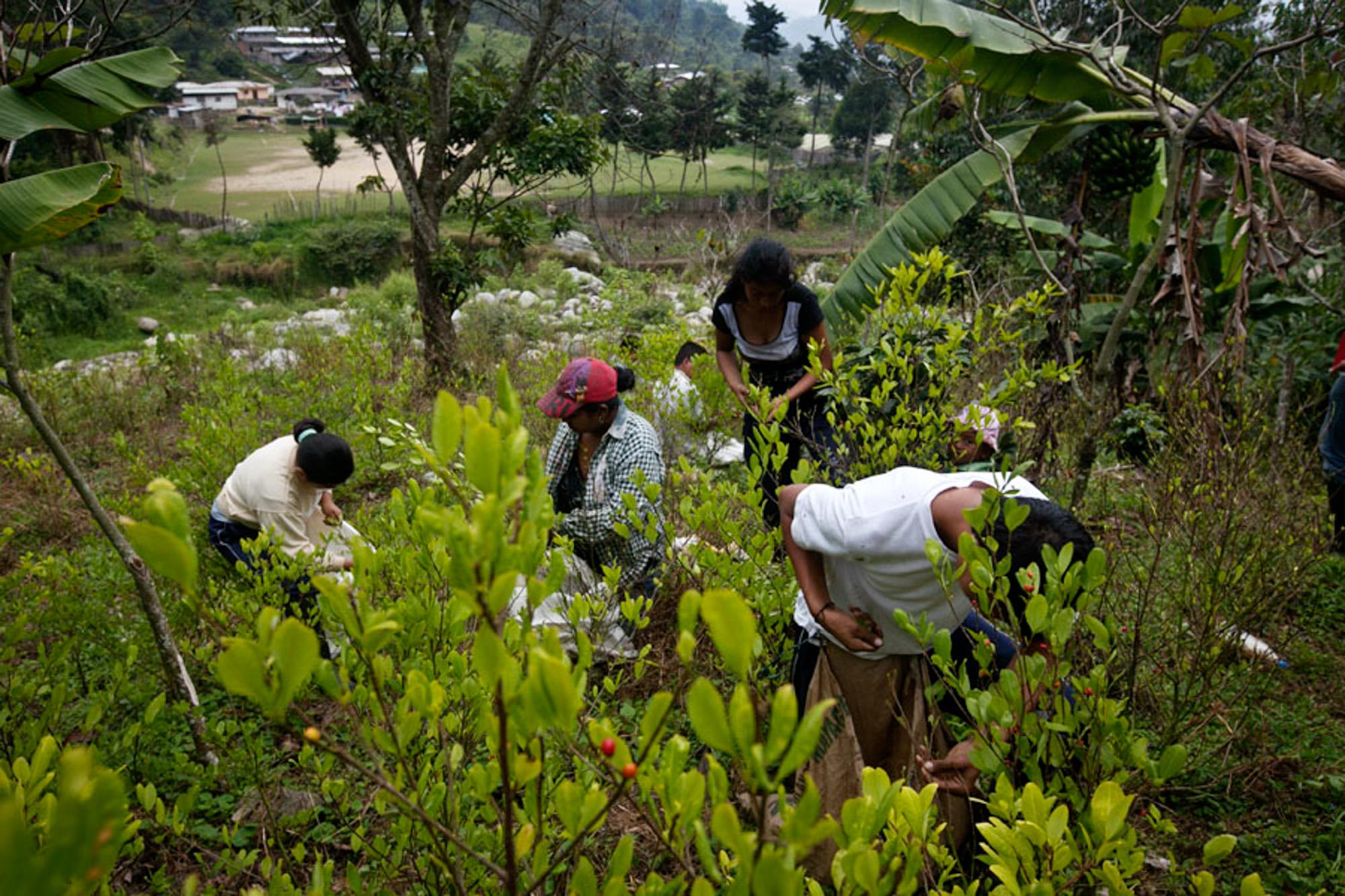 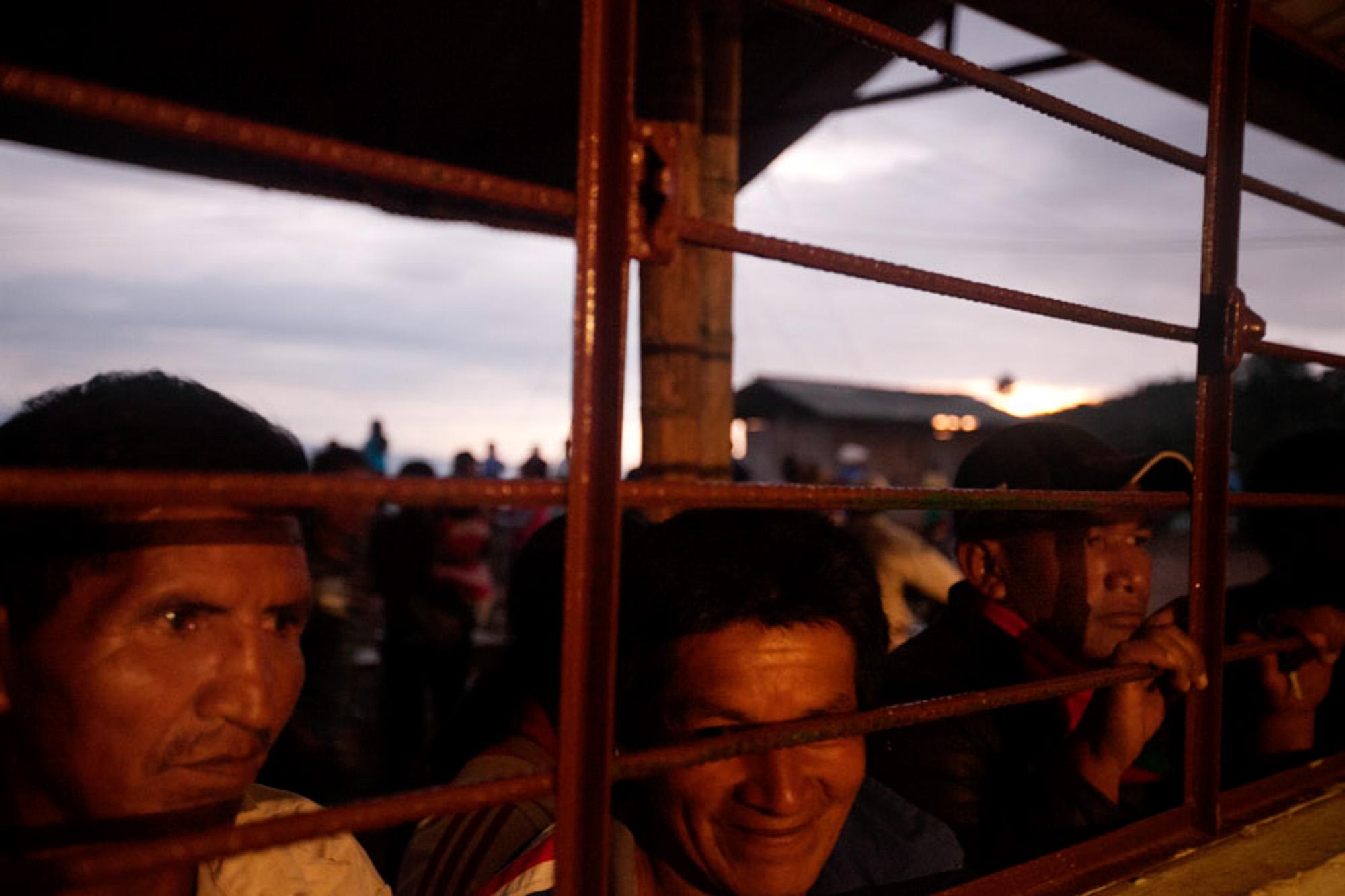 Nasa people who have been mining for gold illegally, listening to a verdict by local community elders, forcing them to quit any kind of mining activities.  Muchique, North Cauca. 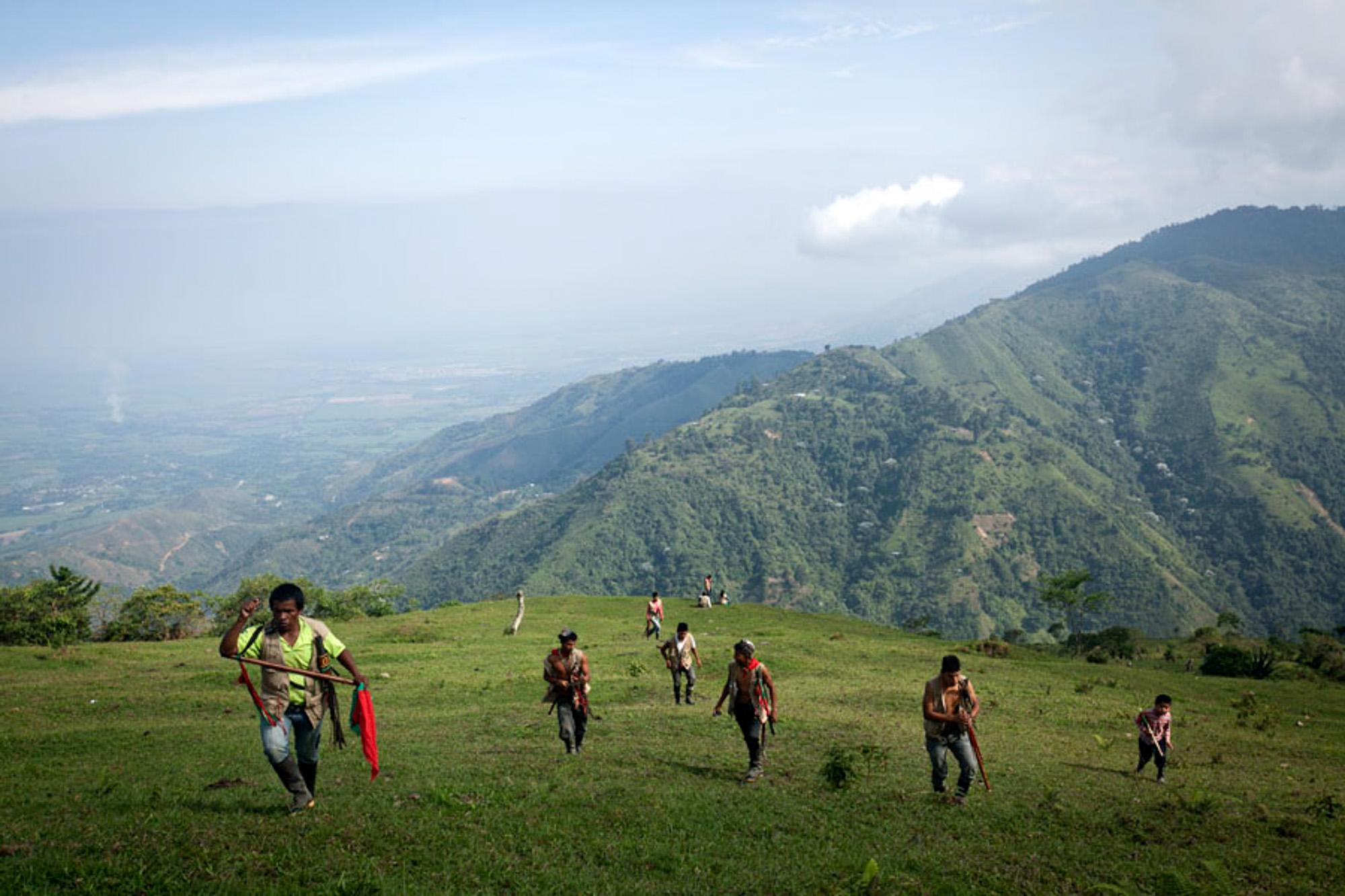 Members of the Nasa guard climbing Mt Dantas, in order to patrol disputed areas where the Colombian army is stationed in. Miranda, North Cauca. 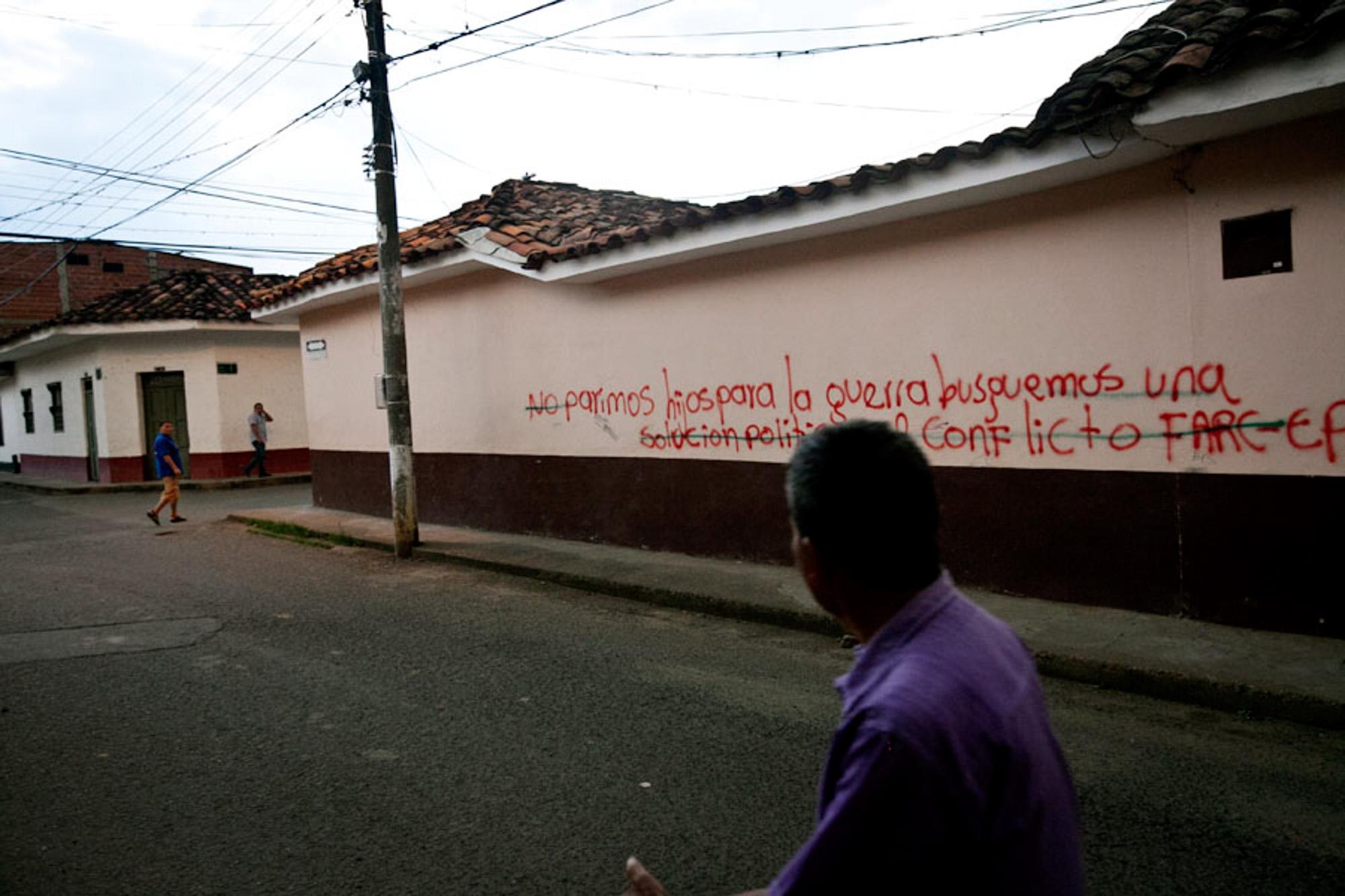 "we do not give birth of children/sons for the war. we look for a political solution of the conflict, FARC-EP" (revolutionary armed forces of Colombia's people's army). Santander De Quilichao, North Cauca. 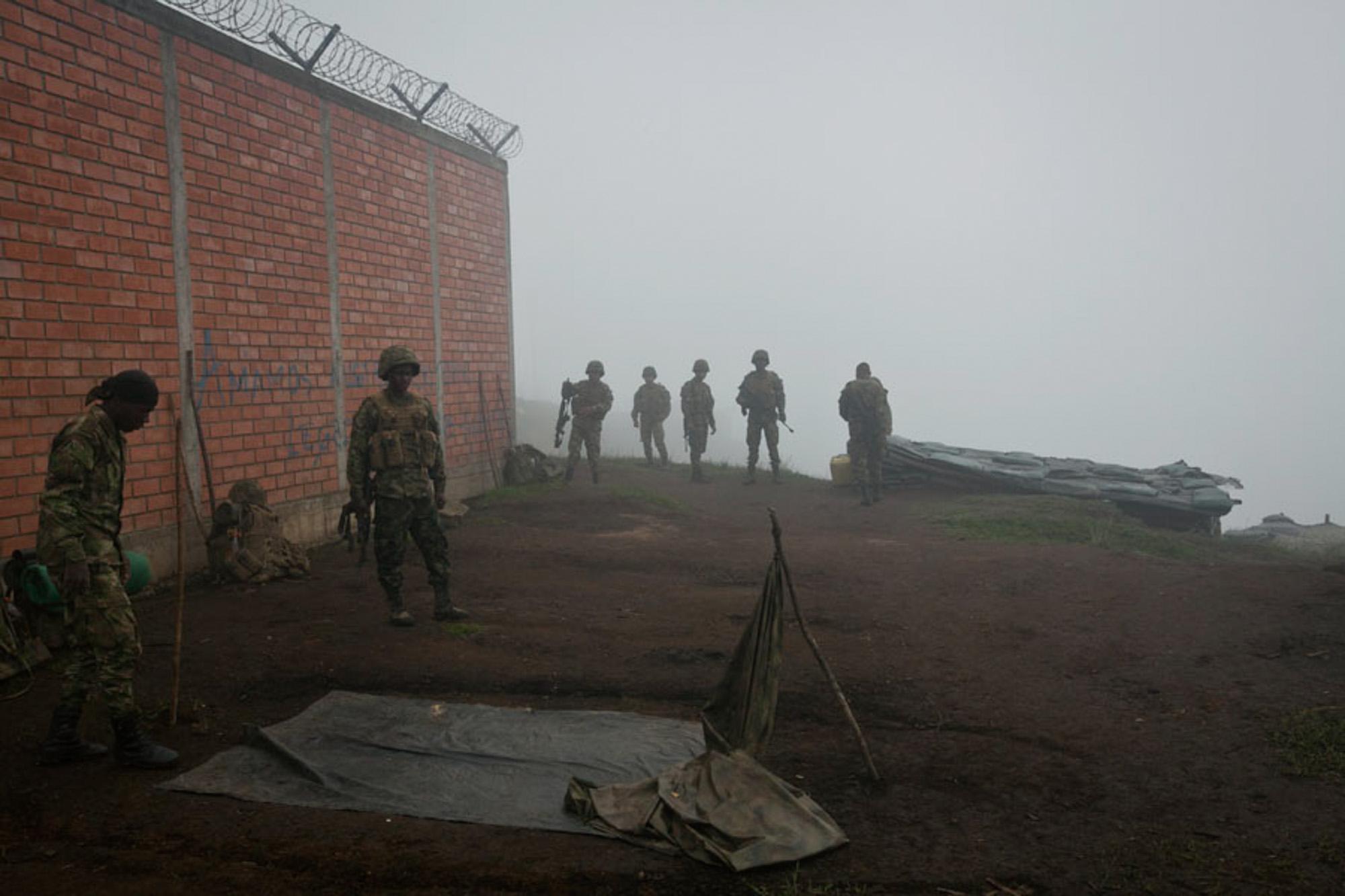 The Colombian army based on top of Mt Berlin, a land disputed area between the Nasa people and the Colombian army. Toribio, North Cauca during July 2012 indigues activists stormed the hill top military base (on Mt Berlin) in protest over land rights. 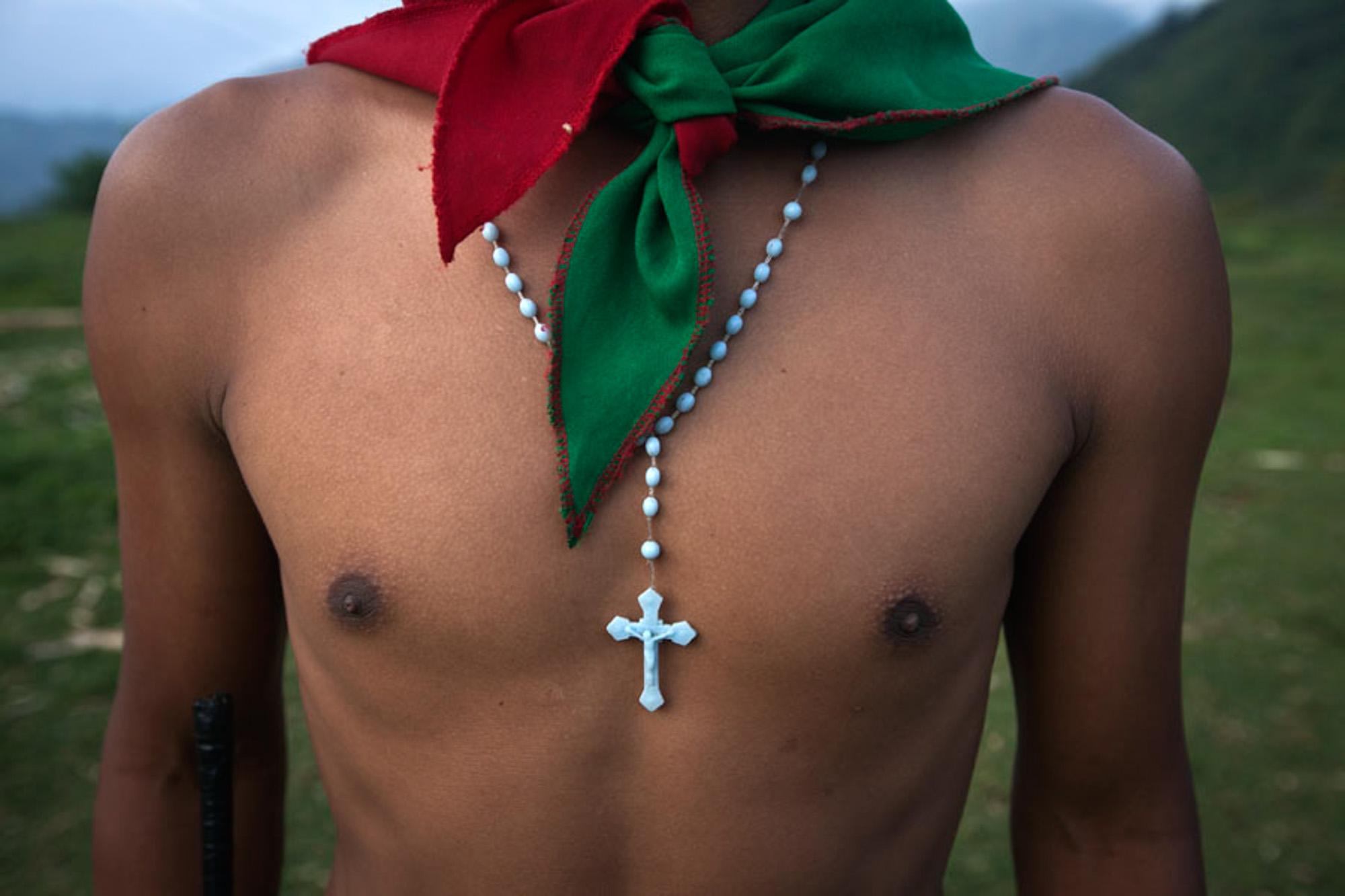 A young member of the Nasa guard wearing the guard scarf and a crucifix  . Miranda, North Cauca.